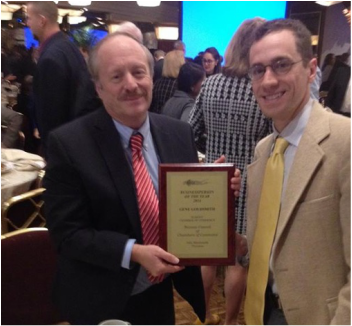 Gene Goldsmith, left, at the award ceremony( Courtesy: Chambers of Commerce)
You had expected to see Gene Goldsmith as a chief executive officer of his company, in suit. But he was in a pair of black jeans pant and blue jeans shirt. He says he hardly wears suit to work, because his business requires work and not dressing to impress. He says it is how appears to work at Timely Signs located on Linden Blvd., Elmont area of Long Island, New York.
Recently, he was awarded business man of the year by the chambers of commerce, for supporting schools and local businesses, a recognition for his business philosophy and community sense of belonging.
He laments what he describes as business downturn in the last four years, which he says has has affected being nice to workers whose raises have not been as they should.
Concerning how he cares for his workers, he says, "Always looking at the bigger picture. The more value you provide with whoever you are working, the more you are likely to keep your position, and expand on the position."
He reiterates that the reason he has been recognized by the chambers of commerce is not how hard he has worked, but it is because he does things to support the community. According to him, he does things to help local businesses and schools. He remembers that for many years his company has been hiring through the local high schools and local community college.
Goldsmith is not a stranger to Elmont, where he said he grew up, pointing to about nine blocks away from his current office, and where he works about 50 hours a week. But he does not place emphasis on the number of hours worked, because to him that is not unusual. Rather, he believes in delegating responsibilities and spending time wisely as much as possible.
"It is not really working extra hours, but it is about being efficient as much as you can, like we see cell phones make more efficient now for memories and things like that."
He says business philosophy at Timely Signs revolves around knowing the cost and the overhead. He believes a lot of people fail in business for lack of knowledge about costs and overhead. According to him, a degree in Finance has been helpful in sustaining the growth of his business.
Goldsmith began working in the company's shipping department in 1968. The company originally belonged to his father who started the business. He remembered that his father opened a second store somewhere in Long Island, and he took over the Elmont office in 1976. He has since been in control following his father's retirement in 1980.
His definition of sign business is about making people look great and about doing what you say. He believes that anyone can be a sign guy right now with the advent of the computer, but explains that the idea of doing what you say you will do; treating people well and and continuing to provide great service are rare.
He made it clear that Timely Signs puts emphasis on sign business as service business and not art. He agrees that art is important, but it is not as important as providing what people expect in service. He says it is why Timely Signs pays more attention to human relations, workers and customers as a team, through deliberately tailored working relationship. He said he does not consider his workers as workers, but a team.
On competition, he says he believes in giving everyone a fair deal, and cares little about competition, because he says the market is big enough for everyone. He continually recalls how many businesses fail due to lack of service orientation, not doing what they say and not failure to build relationship with customers. For example, he doesn't consider losing a customer based on prize as a thing to worry about, because no company survives just on selling prize, but by giving service.
Goldsmith reveals that Timely Signs' oldest customer is J.T Freeman, who he says is probably about 94 years now. Timely Signs and Freeman crossed path when the latter was in car business in the 1960s.
He said he accepts and embraces changes, because he believes whoever does not is cooked. "We always talk about what is the next development. We have had about three monumental business changes in the last 30 years. Originally, we were manual formulated and there was another change from 1968 - 1985. In 1985, we bought our first computer."
He revealed that in two years, the company got rid of its first technological equipment, because they knew they were no longer in vogue. The company, he says changes techniques with dictates of technology, whether in manufacturing or marketing. He remembered that the company formerly had a robust mail order business, which stopped being the vogue. He confides that the computer has changed the nature of business. He also speaks of how technology has affected hiring directly from the high school, because work now requires much more knowledge beyond high school's scope.
Goldsmith has been married for 36 years with two grown up children. One of his children works with him in Timely Signs sales department, and the older one works with the PriceWaterHouse as CPA. Goldsmith reveals that his wife has been a member of the chambers of commerce for several years. However, he said he hardly allows business to intervene with the family. He said they keep business and family apart.
An alumni of Elmont Memorial and Nassau Community College, Goldsmith also attended CWPost College before heading to graduate school. In addition to his education, he reads motivational books from authors such as Dale Carnegie and P. Hill. His advise to upcoming business people is that to succeed, there must be burning desire for success, learn and know how to deal with people, explore and understand the field you have chosen.