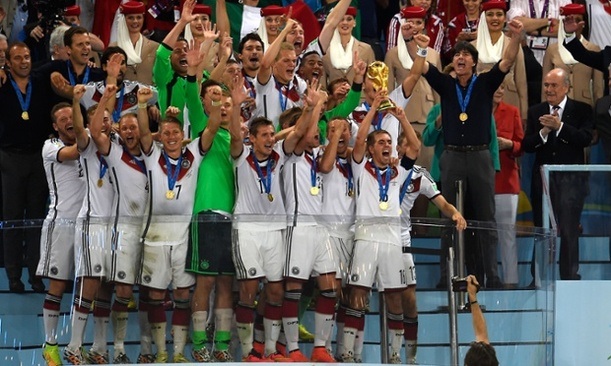 Germany's victorious team savors a moment of triumph in 2014 World Cup final
Germany has won the world cup after defeating Argentina with a goal scored by Mario Gotze during the extra time of the game.
It is about a winner emerging at last after the game has dragged into the extra time. The game completely proved wrong those who had said Germany will finish Argentina early in the game, and proved right analysts who had said the game will be played almost into the last minute for a winner to emerge.
With the first 90 minutes without goal, anxiety was all over spectators' eyes. And when the goal eventually came, everyone was certain that the Germans would carry the trophy with little time left for Argentina to contend against Germany's victory path. It was a final worthy of its name.
Lionel Messi has won the golden ball as the world's best player, and Germany's goalie, Manuel Neuer won the golden glove as best keeper. James Rodriguez of Colombia won the golden boot as at highest goal scorer of the tournament.
NEWS AND FEATURES
News & Features Around The World