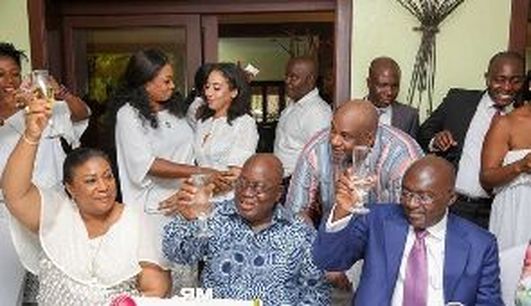 President Nana Akufo (middle), his wife, the vice president and others. Courtesy: GhanaWeb)
What is wrong in politicians enjoying and having good times, other than that the money used for such rendezvous should not be from the state coffers? But can one ever trust politicians to use their own money, when it is the wish of all comers to enter the state house and have access to the largesse?
The opposition party in Ghana has accused the ruling party under Nana Akufo Addo having  7 dancing parties within the government's 100 days in office.
And the ruling party has not denied the accusation, but has also accused the opposition party of the same attitude in the days of Jerry Rawlings as president.
According to a report by Ghana Web, Kwaku Boahen, director of communication for the National Democratic Congress, said President Nana Akufo-Addo has thrown seven lavish parties withing 100 days in office for friends and family. And he asked: “Is that how he is going to protect the state purse by throwing lavish parties for friends and families? Using state resources to buy expensive and customized whiskies to enjoy with friends?”
Rather than deny that lavish parties have been held on numerous occasions within 100 days in office of Nana Akufo-Addo's presidency, Kama deen Abdullahi, the ruling party's Nasara coordinator said "when it comes to profligate expenditure the NDC has an unbeatable record citing instances where monies were blown on parties under the watch of former President Jerry John Rawlings, in response to Boahen's request for the costs for the cost of organizing  each of those parties, for Ghanaians to know how their tax money had been used by the current government.
However, Abdullahi said that none of the parties were held at the presidency, but at the private home of the president for few relations and friends in commemoration of certain important events of his life including the 20th anniversary of the president's marriage to his wife.
Abdullahi said that unlike the NDC's time in government, when protection of th treasury was not a culture, the Nana Addo's government is protective of the people's purse and that the recklessness by opposition handling of finance during its time as a ruling party is responsible for its irresponsible opposition.