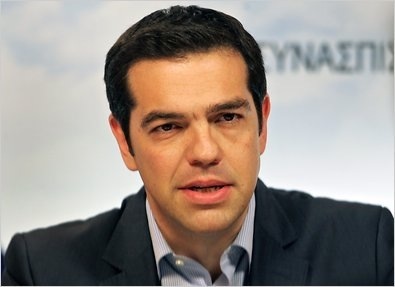 Alexis Tsipras of Greece
Economic insolvency could happen to anyone or any country. In a simple term, it is termed a state of being financially down or broke. How such a situation is managed will determine the outcome, but if not managed well, it could spell doom.
The news from Greece and the result of the referendum about whether the country should accept bailout conditions from its European creditors or not is a statement about a country in financial and economic trouble.
Though the country's referendum results show that the Greeks have rejected the bailout conditions; the country's minister of finance, Yanis  Varoufakis, resigned from office against expectations, but expectations of what may follow if the country does jot act swiftly amounts to an Armagaeddon.
According to a New York Times report,  Greece has only days or hours, to obtain any form of agreement from its creditors before full-scale economic collapse sets in. The country’s banks are on the verge of running out of euros, and Greeks could soon begin to suffer shortages of fuel and other imported goods.
As at the weekend while the Greek people were voting in the referendum over whether or not to accept the bailout conditions, reports showed that the maximum amount an individual could withdraw from an ATM was $67.00.
The former finance minister, who was forced to resign, because the creditors said they did not want him any further on the country's negotiating team had told his country to schedule a quickly work toward an agreement that will restructure the country's debt, austerity with human face and genuine reforms that will favor the needy.
The European creditors had rejected the use of the word 'terrorism' for description of the bailout conditions as used by the former finance minister for the bailout conditions.
Meanwhile, analysts at the Deutsche Bank said that by the end of the week, many ATMS will be running out of cash. There is a report of uncertainty over payment of public sector wages. This is viewed as capable of leading to more economic consequences for the needy.
The possibility of Greece crashing out of the Eurozone cannot be ruled out. Although, the French Finance Minister said President Francois Hollande does not wish to see Greece exit Euro, but added that of the country decides to leave,the Euro bloc would not be destabilized.
Veritably, Greece was broke. It got help from creditors. What the country has been experiencing is not different from the life of a former rich individual or organization but suddenly find itself in a financial hot water.
Only poor individuals or organizations, who have experienced a fall from from the grace to the grass, can understand what Greece people are currently experiencing. It is extremely hard to be poor or down. It is like a curse to be poor or down. It is why the rich wants to be richer or do anything to maintain the status quo and the poor struggles to yank off the curse of poverty.
NEWS AND FEATURES
News & Features Around The World