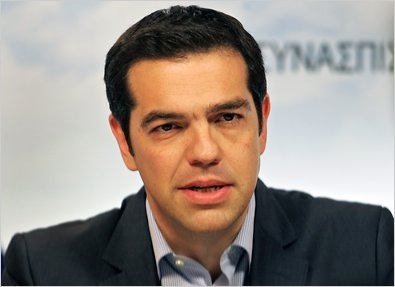 Tsipras, Greece PM
Greece has chosen to stick with the EU and the bailout, and says that the hard time is not over, after about one month of hot talks by the Greece's finance minister, Yanis Varoufakis, against the EU, and his country's readiness to go to the United States or Russia for financial help than stick with the EU.
Could Greece kick against the European Union, EU, and manage its economic crisis by defaulting on its debt? It was the question majority of observers asked before and after the outcome of the recent election in Greece.
The answer to the question was not quickly forthcoming, despite the opposition's victory in the election against an incumbent, who  promised to retain the status quo, opposite a challenger's promise of hell with European bailout and demeaning economic life in Greece.
The first answer to the question could mean that Greece new rulers have abandoned its election campaign promises,  because the country has been unable to abandon the EU bailout, though Varoufakis says the new leadership has voided the previous administration's austerity commitments by EU's concession of additional period of grace for the country to reform its budget and demonstrate desire about its seriousness to pay back the bailout money.
The EU creditors are still asking for the bailout money of $359 billion Greece has taken. The creditors gave Greece four months of grace instead of six months Greece has sought to renegotiate its debt.
Observers don't see what has happened between Greece and its creditors as a victory for Greece, against Varoufakis's claim of victory and an end of austerity. People are asking how austerity can be over as claimed Varoufakis, when the bailout is still there and the hard time is not over?
Observers are saying that Greece's new leaders still have a lot of work to avoid Greece defaulting on its debt. They say the creditors have been gracious by giving Greece four months to put its acts in order, and that it is possible for the creditors to go another two months if Greece leaders are not able to show readiness to begin payment after four months.
However the important thing they say is that Greece has to honor its obligations currently on postponement. They say it would have been another scenario if the creditors have forgiven part of Greece's debt. The creditors are still asking Greece to honor its obligations.
And people say Greece new leaders may have chosen to stick with the EU, seeing the impossibility of the US showing readiness to discuss financial help with Greece and the political burden of approaching Russia. And that if Greece resorts to China without fulfilling its obligation to its EU creditors, China may not be ready to play ball with it.
They say one thing Greece may not do is go to Russia in view of Ukraine's experience. And that for Greeks, nothing may have changed, other than the political actors in the state house. Prime Minister Alexa Tsipras confirms with a statement that the important in the current agreement is that the country looks up to Eurozone finance ministers for funding.