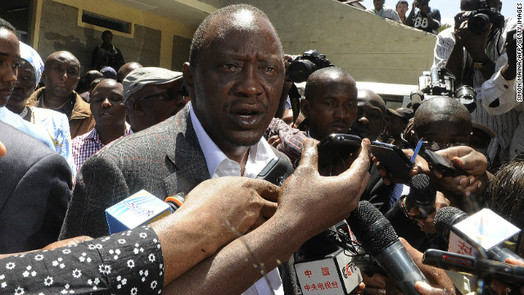 Uhuru Kenyatta (Courtesy:CNN.com)
Yesterday, the world heard President Uhuru Kenyatta of Kenya declared victory against the monsters that attacked the country. President Kenyatta said 61 civilians died in the terror attack in the Nairobi mall. He was silent on the number of uniformed people who may have died in the tragedy. But in a later statement, he said 72 people died, comprising 61 civilians, 4 uniformed personnel and 7 militants.
Also on Monday in New York, President Obama and Goodluck Jonathan of Nigeria met, and report said their dialogue centered on how to curtail terrorism. Reports said the two men made specific reference to the event in Kenya, where Al-Shabab terrorists had killed scores of people in a Nairobi mall.
Commenting on the events in Kenya, many people believe that only monsters can operate the way Boko Haram of Nigeria and Al-Shabab of Somalia do, slaughtering humans like Grendel, a monster that is believed to have been killed in Beowulf, a popular Scandinavian epic, titled after the name of the monster’s killer.
Today, people are imagining how a set of monsters put guns and grenades on the head of unsuspecting shoppers, ending their lives and maiming hundreds for life.  And on Sunday, many people went to the Church in Pakistan unaware it would be their last.
Grendel's operations left Hrootgar, the Denmark leader, in unhappy mood most of the time, just like Uhuru Kenyatta was observed doing from last Saturday that the terrorists stormed the mall in Nairobi.
It has become a regular occurrence that when terrorists are not killing people in Nigeria, they are killing people either in Kenya or Somalia or Pakistan. Like Grendel, these terrorists live in the outskirts, coming out momentarily to wreck havoc. These terrorists, like Grendel, love the sight of blood, and hate humans exhibiting joy.
The attack on the Kenya mall offered a quick recollection on how Grendel attacked the Heorot, a hall for singing and celebration for the Danes, because he hated praises said to God in the hall!
In the Dane’s time, before Beowulf ended Grendel and mother’s life, Grendel made life miserable for Hrootgar, being helpless and knew not what to do to stop Grendel's impunity. And today, Grendel’s children who have transformed into terrorists are making life miserable for the civilized world, and leaders who identify with western education around the world are in the same frame of mind that Hrootgar found himself before Beowulf’s arrival.
Is there any leader who wants to be woken from sleep that some set of monsters have attacked and killed innocent people, for no wrong they have done? George W. Bush lived that life as a president when the twin towers were brought down by terrorists. The Malian president, Ibrahim Boubacar Keita, had lived that life when the terrorists stormed Mali and the French went and saved it. The Nigerian president, Goodluck Jonathan is living that life; sleeping with one eye open and one eye closed, because he is never certain when the murderous terrorists will strike in the north of Nigeria. The Pakistani leaders have also become used to the uncertainty.
And one can see the redness in Uhuru Kenyatta’s eyes for the evil visited on Kenya last weekend. It underscores the battle against terrorism spearheaded by America’s effort around the world. The world heard Kenya’s president account for lost civilian lives, uniformed personnel and militants. Now people will scared of visiting a mall. In Nigeria, a call has gone out to government for a tighter security around mall in the country, especially in the South where the militants have not dared carry out any attack.
Over 2000 people have been killed by Shekau led Boko Haram in Northern Nigeria. There was a news report that said Shekau may have been killed by the Nigerian forces. But there was no confirmation, as the tug of war between Shekau's men and the Nigerian forces had continue,d unabated. Just like the terror network around the world has been festering after Osama bin Laden's death.
Apparently, last weekend's attack on Kenya was not the first terror attack in the country. Although, Al-Shabab has claimed responsibility for the dastard act and for what what it calls the country's involvement in the war against terror in Somalia. Since the war against terror Somalia is still on going, it is a sign that Kenya has to be alert, since victory against terrorists does not often signal an end to feud.
.