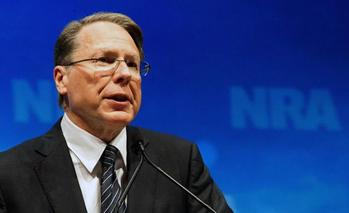 Wayne LaPierre
Efforts at gun control suffered a setback today in the United States, when the senate voted out a bill targeted at tightener backgroung check.
"All in all, this a shameful day for Washington, " disraught President Barack Obama remarked in a statement at Rose
Garden shortly after the seeming defeat of steps to tighten gun ownership following the Connecticut's Newtown massacre that claimed 26 innocent lives.
"We return home disappointed, but not defeated. Our hearts are broken. Our spirit is not," a parent of one of the Newtown shooting victims said during an appearnace with the president shortly after the senate's vote. The senate had voted 54-46, six votes short of 60 votes required for what would have been a signal for effective gun control in a country where gun ownership is said to be lax that anyone can buy a gun at gun shows and online without scrutiny.
Observers see the senate vote as a victory for the anti-gun control people led by Wayne Lapierre's National Riffle Association. And that may have President Obama's question,"Victory for what?" Rather than seeing the voting at the senate as a victory for anyone, the president says the voting is a preservation of the loopholes in the country's gun control law.
Curious observers said the senate's position was not a surprise, because about a month ago when voting over gun control was first mentioned in the senate, Harry Reid, the senate president said the truth that he could not get enough votes for it.