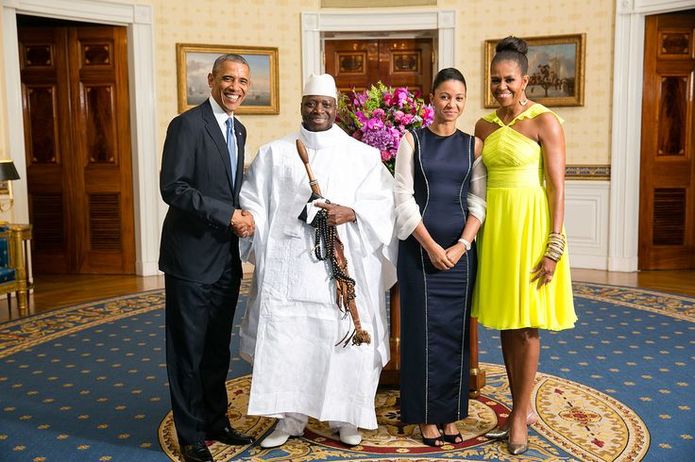 Outgoing U.S. Presidents Barack Obama and Yahya Jammeh of Gambia, and their spouses
United States and Gambia are two countries that are currently in the news, about discussions concerning elections, their outcome and some individuals' seeking grounds, to render results inadmissible.
In the U.S., Jill Stein. leader of the Green Party, sought recount of votes in three major battleground states, toward rendering Donald Trumps triumphs in the elections nought. Though it would not have benefitted her in any way, if she has achieved her aim.    Nonetheless, she said she wanted to ensure the integrity of the U.S. elections, as if she is the head of the country's electoral commission.
Gambia surfaced immediately after the drama in the U.S, when the incumbent leader, Yahya Jammeh suddenly turned around and pulled back the concession to his challenger, wgo won the country's presidential election. Latest news from Gambia shows that Jammeh is pressing towards the highest court in the land to fight what he call unacceptable irregularities in the elections.
Latest From the U.S. is the about the C.I.A's report that Russia may have  reliably interfered in the country's presidential elections by hacking the computers of two major parties, while hacked information about one of the parties and its candidate and her campaign manager were widely published and none of the other party's information has seen the light of the day.
Trump's immediate reaction was against the C.I.A. was a reminder of how the organization helped in misleading George Bush over the non-existing weapons of mass destruction in iraq. The winner in the U.S. presdential election has not stopped his criticism of the C.I.A and the intelligence over whether Russia hacked the U.S. election and whether Russia intereferred and influenced the elections' outcome.
Observers believe that many facors influenced the outcome of the elections and not jus the hacking and the wikileaks publications against the Democratic Party and its top managers. The hackers, whether Russia or some other hackers, did their job, and Wikileaks completed the assignment of making the infrmation public.
People are saying that there is nothing to show that there has been any conspiracy between Russia or whoever the hackers were and the Trump campaign. They say If there was issue between Wikileaks and the U.S, government or the Democratic Party or Hillary Clinton, which made Wikileaks wanted to ensure that the Democratic Party or Clinton lost the election, that should be the problem between Wikileaks and the Democratic Party or whoever Wikileaks has grudge.
People are saying that hackers are not out of this world. They live here and there and they are paid for the work they do by their employers. They say that one of the lessons students learn in the Business Ethics classes is that hackers are employed by organizations to help ensure their businesesses are not hacked from the outside. And that these hackers are asked to hack their own employers, detect areas the company can be vulnerable to hackers and then work to block them.
Curious observers say that if hackers from outside the country have been successful in hacking the country, it means that those charged with the responsibility to protect and defend the country against outside interferences have not been doing their work.
The consesus of opinion is that the C.I.A should leave the elections and the outcome alone, since many factors have played into determining the elections' outcome. Clinton has accepted the elections' outcome and many voters who voted during election cycle have played their role and have taken to doing what they do best, concentrate on their works, how to pay their bils and take care of their families.
The best is that people in government should not make things unnecesarily difficult for others by pulling the hands of the clock back and distracting people from their daily cores to issues that should be allowed to rest. It is why the world sees Gambia's Jammeh's sudden turn around to reject what he has earlier accepted as manifestaion of insanity. People are saying that he should step down and allow the election winner to assume office.
NEWS AND FEATURES
News & Features Around The World