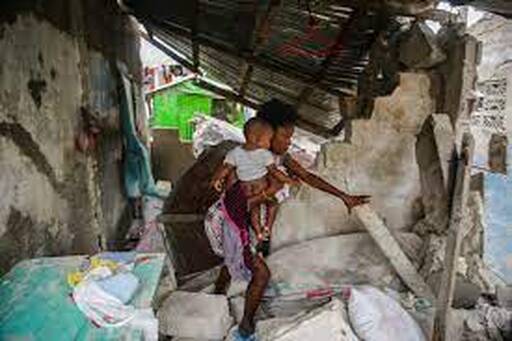 A mother and her child in a dire situation (Courtesy:TimeMagazine)
There was a news report about the earthquake in Haiti over the weekend with some human casualties aside from structural damages shown in photographs. It is a reminder of the destruction that accompanies its devastating occurrence. Unfortunately, the Afghanistan political crisis has almost obscured the happening in the Southwest of Haiti.
The world had witnessed more than enough of its event with deadly impact, especially when followed by a Tsunami. Last weekend earthquake in Haiti was not the first in the country with deadliness. People have rarely forgotten about the quake in Haiti in 2010 that shook the world to the hilt. Reflections accompanied the weekend's occurrence about 2010.
Many people forcibly asked without intending any dark meaning, "Haiti again?" There was also a quick reminder of the recent killing of the country's leader. These questions boil down to why these are happening to Haiti. Reports said that Haitians in the United States were eager to hear about the news of events from home.
A young woman interviewed on television said she was a victim of the 2010 quake. She said she would never forget the experience. Other interviewees said they waited eagerly for more information from home.
One Haitian interviewed by this reporter in New York said all members of his family are safe here in the U.S. and that he has no one there to think about whether such a person is affected or not. However, he said he has two buildings in the country, and the information he has is that his properties are not affected by the quake.
Of course, there is a large population of Haitians in the U.S., just as there is a large population from many Third World countries. The preferred information is what the Haitian said that his people are safe here in the U.S. and that houses in Haiti are intact. But not all people can be that lucky.
Those who lost their lives in the weekend disaster are from the same society. They are from some families who are now bereaved or grappling with their losses. Yet, there are others unaffected by the same due to mother fortune. Misfortune does not belong to any. When fortune and misfortune interplay, no one wants the latter. The same quake that its impact failed to affect some others killed others.
One news report put the casualties in Haiti at 1,941 people. About 1.2 million people are affected as a whole, quoting a UNICEF figure. One can only imagine about 2000 people who went to bed on Friday night and found themselves buried under the rubbles over the night. As I write this, a search is ongoing to save people who may still be under the debris.
Whenever one remembered the Tsunami in Indonesia and Haiti in 2010, the fear of quake grips the mind, a reminder of another dangerous tide called a Tornado and its devastating capability. People have learned to live with these deadly natural incidences having no solution to stop the occurrences. Life has always continued after every fatal experience. Haiti urgently needs help. Afghanistan is a disaster in the waiting.
The event in Haiti is a disaster that has happened. It is where the world must turn attention to help the needy at this moment.
NEWS AND FEATURES
News & Features Around The World