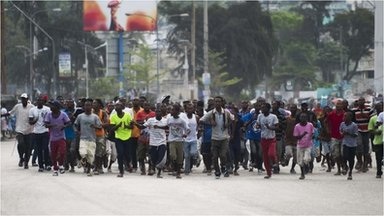 Haitians on the street (Courtesy: BBC)
Suffering and Smiling" is the title of a song by Fela Anikulapo Kuti, the late Nigerian Afro King, in which he addresses the way his compatriots in Nigeria have been confronting hard political and economic situation. Although, Fela's song is a recording in tandem with situation in his country, it also has universal appeal, since bad political and economic situation knows no bounds.
Currently, the unraveling of petroleum products' prices around the world is making people in countries with bad economy cry and angry as events in Haiti attest.
The Haitians are angry and they are not suffering and smiling. They are making bonfire on streets and protesting high prices of gasoline and its damning effects.
The reason is clear: High prices of petroleum products add to cost of transportation; push up production cost, these in turn affect prices of commodities and making life hard for the common people.
Reports show that there has been a clash between protests and law enforcement resulting in injuries. According to the BBC, angry protesters have warned transporters not  to dare come to the city in Port-au-Prince, unless at the risk of their lives.
There is an argument over the cost of pricing of petroleum products between government and protesters. Some people among the protesters are calling for 50 percent reduction in the prices of petroleum products to make life amenable and calm nerves.
However, the government officials sight earlier reduction of prices and said that further reduction will have negative effects on the economy.
NEWS AND FEATURES
News & Features Around The World