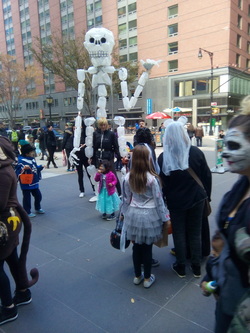 Halloween at Brookfield Place in Downtown Manhattan (Photo by Abiodun Giwa)
A pregnant woman, held her two children, one male and one female and they climbed into a Jersey City's transit bus at the John F. Kennedy Boulevard and Cliff Street intersection, on Friday before the Halloween day celebration.
She is dressed in a black overall with different drawings of human skeleton, but the one that attracted attention was directly on her protruding stomach, part of her face painted white and the point of her nose blackened.
Her male child is dressed in a camouflage with a black jacket and carried a make belief AK.47.  The female child also dressed. They were heading to a Halloween party somewhere in New York City. The pregnant woman and her children's seemingly odd dressings became the characteristic the following Saturday across the United States in celebration of Halloween.
A young man was leaving his place of work on Friday. When he was asked by one of his colleagues whether he would be going out later in the evening, he said he would be going home to relax and later sleep, because he would be taking his child out for the trickle three the following day, when stores around the city were expected to be host to children accompanied by their parents or older relations seeking the trickle three.
Store managers said they have no choice than to budget for the gifts they give out to numerous visitors on the Halloween day. Other people interviewed about the tradition said that it is the only way stores show appreciation to their neighbors patronage through the year. It thus translates or means that store owners not only pay taxes, they also make provision for Halloween reveler every year.
For the adult revelers, the weekend is a period of endless partying and visitation to haunted houses. Some of the haunted houses are accessible free, while some charge fees. The common characteristics in haunted house are settings that depict death, witchcraft and evil. Going to the haunted house require dressing like a devil with the face paintings mimicking the devil. Visitors get drowned in booze amid reveling. Rosemary, last name not disclosed, have been inviting a male co-worker for them to go together to a haunted house in Long Island. The male colleague had asked about the procedures in the haunted house, and Rosemary had said it is what is seen on the streets during the day and the night during Halloween celebrations.
"It is evil," she said. "But it is not real, because all is but having a good time." The good time begins every year with people adorning the front of their homes with all sords of effigies depicting the weird.
A guy said that one night he was leaving his home to go to work, and that ahead of him on a block leading to the bus stop, he saw figures he though were human beings gathered in front of a house. But when he moved closer, he discovered that they were hangings of Halloween collections.
There are stores that engage in big business selling these collections seasonally from August through to the end of October. They make great money. There are people who catch on the opportunity for a brief employment in the stores. As soon as the Halloween celebration is over, the stores are closed, to be reopened the following year, if the owner has not got a better renter.
Some are asking whether the devil possess a blackened tip of the nose as being depicted by women in their caricature of the devil during Halloween celebrations. Every woman one sees on Halloween day, no matter the dressings for the day without the blackened tip of the nose. Someone said that it is all about reveling, because no one knows exactly about how the devil or the dead looks, or whether the picture we see women painting with the nose is a representation of the devil or the dead.
NEWS AND FEATURES
News & Features Around The World