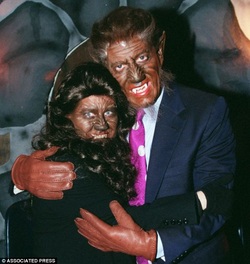 Halloween portrait (Courtesy:mailonline.com)
A sales attendant at a Halloween Costumes' store in Flatbush, Brooklyn, heaves a sigh of relief that no worrisome hurricane news in weather forecasts this year. She recalls that some Halloween stores got washed up in certain areas of New York last year, and says that the absence of possible hurricane threat to Halloween this year makes her to feel a great relief. At the entrance to the store, a boldly written welcome "Spirit of Children" hangs above the door. Another one says "So much fun, it is scary."
A picture of a man in white shirt and a black tie, blood splattered on his forehead and mouth with a set of teeth characteristic of Dracula, sits on the floor for the attention of people coming into the store. At the top of a wall above the cashier's desk is a statement, "Making hospitals less scary for kids and their families."
Last year, Hurricane Sandy’s devastation tossed out the Halloween’s celebration in the Tri-State of  New York. People hardly noticed the Halloween displacement because of Sandy’s ferociousness, human and capital losses that were so huge that it would have made talking about a missed Halloween equivalent of seeing a house on fire and asking for a man’s beard.
But as it is often said that no condition is permanent, Halloween is bouncing back this fall, children and adult Halloween enthusiasts are glad that the celebration in remembrance of the dead is itself returning, and not permanently conserved to a moral equivalent of the grave, a situation that Hurricane Sandy created.
The trickle-treat holiday will return and children, accompanied by adults will make their rounds in neighborhood homes and stores, seeking gifts generously given by the kind hearted in appreciation of life and good business yields.
A question about the meaning of Halloween will be irrelevant for people living in the United States and other countries where the event is observed annually. But for many people arriving the United States every Fall for the first time, who see some homes adorned with costumes like human
skeletons, skulls and other paraphernalia that depict what some have loudly termed ‘evil’ have asked the question. This explains that just as many people love the Halloween celebration, there are a whole lot of people who see the celebration as indulging children in practices they should not, a reminder to us that what is one’s food is another’s poison.
According to Penumbra, Halloween is one of the world's oldest holidays; still celebrated today in several countries around the globe, but it is in the North America and Canada that it maintains its highest level of popularity. Every year, 65% of Americans decorate their homes and offices for Halloween...a percentage exceeded only by Christmas. Halloween is the holiday when the most candy is sold and is second only to Christmas in terms of total sales.
Some people see Halloween celebration as part entertainment. Some others seize the opportunity for the demand of costumes to make brisk business and avenue for seasonal income. There are hundreds of haunted houses where parties are held through the nights of Halloween weekend scattered across the country. Many stores that have been vacant in major commercial centers have been occupied by stores for the sales of Halloween costume.
Halloween enthusiasts in the Tri-State are fortunate this year, unlike last year when Hurricane Sandy made a landing that sent shock waves across the land. According to the Miami-based U.S. National Hurricane Center, Hurricane Raymond, the first major hurricane of the Eastern Pacific season, was expected to start to weaken last Tuesday. In the meantime, there have been Hurricane Sandy memorial stories all over the Tri-State, recalling the hell this part of the world witnessed last year.
Environmentalists have cried out that nothing substantial have been done to ward away causes of climate change and its consequences since the 2012 Hurricane Sandy's experience.