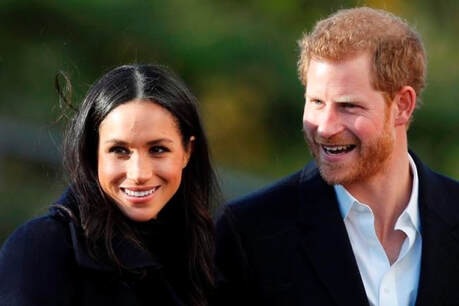 Mr. and Mrs. Harry
Williams Shakespeare was a writer of choice for the royals to record events in the palace. If Shakespeare has the opportunity to witness events that have led to Harry and Meghan's decision to abandon the comfort of the palace to embrace the struggle of the open field, like every other people not in the palace, what would he have written about the couple?
He would offered a snippet of the truth of what may have led to Harry and Meghan's AWOL and a hint about how characters like Malvolio and Maria in the Twelfth Night - commoners in the palace extend hands of welcome and fellowship to the couple, into the tough life outside the palace.
Irrespective of news report assertion of what the couple said led to their decision, many observers say that it is their choice and their decision has vibrated because of their popularity as famous people and the fame as royals.  It is an experience about human lives, about what happens behind the closet  everyday that are rarely heard outside the confines of people's homes. However, whenever it happens to the famous, it will seem it has never happen to others before them. Journalism teachers say anything about the famous is news. it is what makes life hard for the famous anytime they decide to do the unexpected. The hard life that awaits Harry and Meghan is not about lack of bread and butter. It is about the news hounds that are after them following their AWOL and later expulsion from the palace. If they are able to manage the news hounds by being discreet about their new life, how are they going to handle or manage the irresistible Paparazzi?
News reports say that Paparazzi have camped in front of the couples in Canada using all available equipment to get the movement of the couple and their child. Harry and Meghan are reportedly worrying about Paparazzi encroachment on their privacy. And how to deal with the Paparazzi has become a legal issue. Shakespeare's choice of fortune and misfortune about life in the palace and outside palace cruises around and there is no escape from its pang. Harry and Meghan have calculated the fortune from walking from their royal roles and likely forget about the misfortune of having to deal with Paparazzi as famous people and other costs and benefits.
"The couple should have taken a look at the role that Paparazzi reliably played in the family's past misfortune and the need for security and safety for their own lives," some people have suggested in reference to the fatal road accident blamed upon paparazzi's pursuit of the car that Diana and her new beau rode. Did the the couple walked back their roles in the palace to begin a duel with the paparazzi? Certainly that could not have been part of their plans. However, that is part of the crisis of the modern day between the famous and the media and paparazzi.
​     The only pone measure the couple can undertake to stake off the media and paparazzi is to live a life devoid of controversy and try as much as possible to be good representative of the royals out of the palace without titles. They should not expect negative stories being published about them to end soon. This development will doubtlessly make the couple to begin to think whether their decision and the path they are currently treading are normal. They are undoubtedly at crossroads. it will take sometime before reality begin to manifest in their cognition.
​      At the end, if they succeed living as commoners, the world would write glorious stories about them. If they fail, the stories would be about the prince and her queen who abandoned the palace for uncertainty and forever lost.
NEWS AND FEATURES
News & Features Around The World