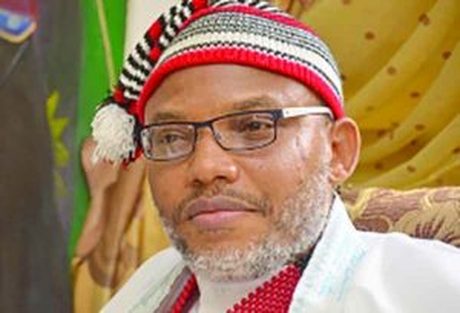 Nnamdi Kanu
The whereabouts of Nnamdi Kanu, leader of the secession for the indigenous Ibo people, whether he is alive or dead, is the hottest news story from Nigeria.
"Is Kanu dead or alive," people ask in silence by among many Nigerians, who still want a united Nigeria and others who are afraid that current development may lead to unwarranted skirmishes, with fears of uncertainly hanging heavily in the air.
Concerned Nigerians are using the social media calling for prayers to save the country, fearful of the direction that the leaders' decisions may lead the country.
The reason is clear: Almost two weeks after the military's  operations in the East and reportedly attacked Kanu's house, Kanu has not been seen in the public and his whereabouts unknown.
The military has said that Kanu is not in its custody and the military's statement widely reported in the news this weekend has prompted questions about where Kanu can be.
​    All Nigerian newspapers have the story as lead. Has Kanu jumped bail, because he is schedule to appear in court in October in a case of treasonable felony against him, and his sureties are saying that the court may come for them in the absence of Kanu.
But many people, including Kanu's lawyer are saying that Kanu could not jump bail and that the military that attacked Kanu's house,  killed and arrested people there, should produce Kanu - dead or alive. Many people are saying that if anything has happened to Kanu, the military will have explanations to make.
Many observers believe that if Nigerian leaders have been zealous about developing the country the same way they go after keeping the country one, the country would have been better that it is now and that many Nigerians would not be leaving the country to seek survival outside - a form of individual secessions from the country through media campaigns,
urging Nigerians to remain home and not travel abroad.
Many Nigerians are saying that the bad economic situation in the alone is enough as reason people are running out of the country and justification for anyone to part ways with the country. They are asking that what joy is in being a citizen of a country that you either don't have right or you don't know what your rights are, other than that you are a citizen in name and your leaders can do whatsoever they like with your patrimony.
Speak to any Nigerian, the story of deprivation amid abundant resources will top the tail of woes. The statement credited to a military leader that there was no attack on Kanu's house by the military could hardly be believed. What are soldiers business in quelling the nuisance that Kanu and his members may have constituted and no one has publicly declared a war of secession against the country?
The military not only attacked Kanu's house, the Defense headquarter went as far as proscribing the IPOB and tagging it a terrorist organization. The proscription and tagging of IPOB as terrorist organization has received cold reception among members of the international community.
The United States and the United Kingdom have said that they don't approve the Nigerian government's decision to proscribe and tag IPOB as terrorist organization. The Federal government is silent, leaving the military to act as the government's mouthpiece in a democratic setting.
Now, one of the governors in the East has said that it is true that governors in the East proscribed IPOB for safety reasons and to be able to maintain law and order, and that the governors are not party of tagging IPOB as a terrorist organization. The military has also said the proscription and tagging as terrorist organization as the handiwork of the Defense Headquarters.
Curious observers say that by using a sledge hammer on IPOB and Kanu, the Nigerian government -using the military to fight a non-existing war, has driven sympathy to Kanu and IPOB mostly among Ibo people - at home and abroad.