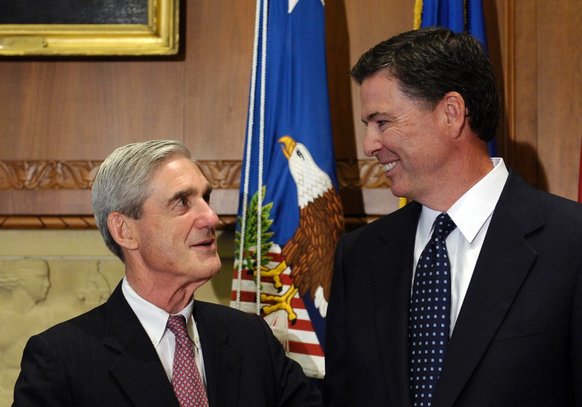 Robert Mueller and James Comey
News reports said on Thursday that Special Counsel Robert  Mueller is set investigating President Donald Trump for obstruction of justice!
The report is credited to another leak published by the Washington Post. In the evening of the same day that the Washington Post reported the leak, Putin called on James Comey, to come over to Russia for asylum.
Three times, people say, Comey said that Trump was not under any form of investigation. But he succeeded after his dismissal to evoke a cause for an investigation: his own dismissal.
Yet, there is no evidence that Russians have colluded with Trump's campaign to hack the Democratic Party.
The scenario is like this: No evidence that a crime has been committed. It was what Comey told the world. And yet his dismissal is being considered as obstruction of justice. Curious observers are asking: Obstruction of justice to cover up what crime? Will the FBI manufacture a crime that Trump, which it will say   Trump tries to obstruct its investigation?
With the Democrats' hang over of election loss, liberals running out of control unable to manage an election defeat without accusing  Russians as the cause of their nemesis, the Department of Justice power play and insubordination among the rank and file of the department, leading to Comey's ouster, people are saying that Russia has undoubtedly achieved its aim to destabilize the United States' politics.
People are saying that if Special counsel Mueller says he has a job to investigate Trump for obstruction of justice, he also has the responsibility to tell Americans the evidence he has got to embark on an investigation to show that Comey's sack was to cover up obstruct investigation.
And people comparing this development to Watergate need to hold their breath. Watergate was clearer in development. There was a clear break in. People were arrested, which led to clear evidence and was traced to the President Nixon's office as collaborators. Moreover, the Nixon's White House either destroyed or hid the tapes of his meeting of the plans for the break in and did not hand them over to investigators, who got the tapes through subpoena .
In this case, Comey said there was a meeting. He said Trump told him "I hope you will let this go." Senator Rubio asked him if this was an order, Comey said it was not. Comey later said he believed it to be a direction for him to stop the investigation of General Michael Flynn. Was there any effort to use the CIA to stop the FBI? Has there been destruction of evidence?
Trump's statement in the White House leaked to the media that he told a Russian ambassador that the cloud over him was over bothering on the Russian investigation with the sack of Comey cannot be interpreted to mean as Comey has taken it that he has been sacked for his refusal to drop Russian investigation. Trump has not said that the Russian alleged collusion with his campaign is not a cloud over his administration and arm twisting him from performing in the office. But that with the sack of Comey, that cloud as an unfounded allegation was off, and he could now face his work. Now, suddenly, the obstruction is no more about Russian investigation that Comey talked about in his testimony, but General Flynn's investigation.
When the Attorney General Jeff Session gave testimony before the Judiciary Committee on Tuesday, he said that the Deputy Attorney General Rod Rosenstein recommended Comey's dismissal to enable the FBI follow rules and regulations, which he said that as Attorney General, he agreed with the reasons given by the deputy attorney general, and the recommendation for Comey's removal for the unprofessional manner Comey handle investigation into Clinton's email investigation. Session gave a good tackle against Comey's assertion that he was sacked by the president to cover up and that he was actually sacked for ego and unprofessional conduct.
On top of this is the fact that Russia seems to have succeeded at making the Republicans and the Democrats become arch enemies, irrespective of the camouflage of Wednesday, after the shooting of the Republicans by a gun man, who asked before his shootings, whether the men on the field were Republicans or Democrats.
Vladimir Putin's request to Comey for him to come to Russia for asylum is a reminder of that time, when the government under Barack Obama went after a leaker and Russia gave the leaker asylum. And Putin is saying indirectly that Russia is also ready to accommodate another leaker.
Hadn't Comey said he leaked his memo to a friend, to help him leak it to the media, to compel the appointment of a special counsel? How the deputy attorney general chose Mueller, who is Comey's mentor as special counsel is beyond imagination. Putin has lashed on this development to make jest of Americans.
​     To understand the disarray that America's politics has run into, one needs to listen to both the Liberal and the Conservative media here that makes the country look like Babel over Russia, Comey and Mueller..