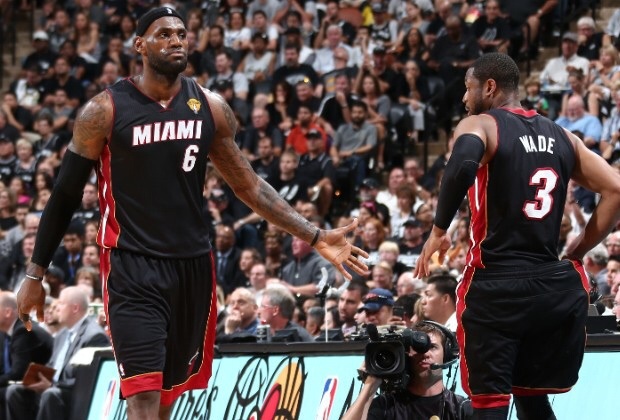 The Heat in a tight and comeback game (Courtesy: www.nba.com)
Miami Heat rebounded from last week loss to the Spurs, defeated the Spurs 98-96 on Sunday, in the NBA finals' second game at AT&T Center in San Antonio, Texas. The two teams are now tied 1-1 in the finals.
The Heat had repeated its characteristic comeback in a second game, the same that spectators saw in its game against the Pacers in Eastern Conference finals, when the Heat lost to the Pacers in the first game with 11 points, but recovered by winning the second game.
On Sunday night in San Antonio, the Heat recovered again from an earlier 15 point loss to the Spurs. What the Heat has going for it is its resilience and ability to turn the table from defeat to victory.
The Spurs won the first quarter 26-19. The Heats turned the table in the second quarter with 24-17. The Spurs led again in the third quarter with 35-34 and the Heat pushed and won the fourth quarter with 21-18.
The Spurs led overall 83-82 at about four minutes and few seconds to the end of the fourth quarter quarter. It was a tight game that no one was sure about the team that would clinch victory until the end of the game. It was grit to grit. The Heat won by playing hard probably with determination to stop the Spurs from clinching the second game.
"We have guys who practice their shooting all the time. When the time comes we trust them," Allen said on twitter about Bosh's go ahead 3-pointer. This is a statement from a victor. What was apparent was that either team could have won the game. Miami Heat had a lucky night. It has its hope restored that it is possible for it to win the finals. The next two games to be played in Miami cannot even decide the winner of the finals with the game now tied.
The Spurs may be going to Miami to do what the Heat has done to it in San Antonio. But if the Spurs allows the Heat to repeat its performance against the Pacers in Miami, it is then that pundits will begin to tell which of the teams that will win the finals.
Of course, the Heat will want to win, win great in Miami. It will depend on the Spurs allowing it. It is certain that Spectators will have good games worth of their money in Miami, the same way they have done in San Antonio.
Comment Form is loading comments...
NEWS AND FEATURES
News & Features Around The World