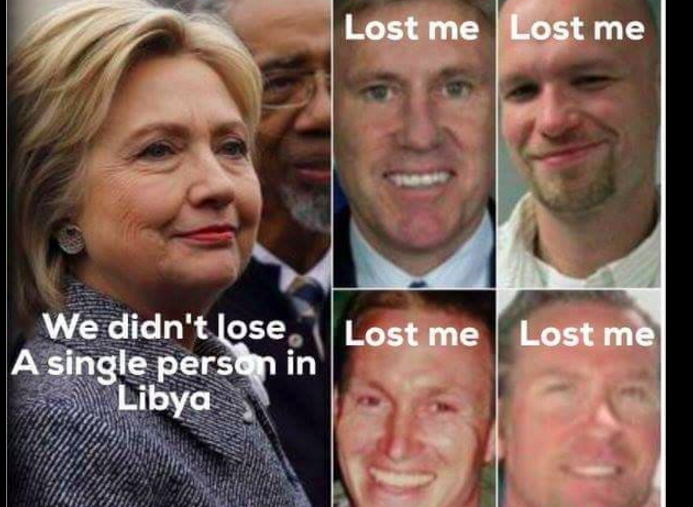 Hillary Rodham Clinton and four Americans killed in Benghazi in 2012 (Courtesy: www.snopes.com)
In term of academic qualifications, marital history and other political service as assets, Hillary Clinton is one of the most qualified Americans to be president of the country.
But she also has baggage that seem to outweigh her qualifications and assets.
​   One of such baggage is the Benghazi episode, in which four Americans lost their lives 2012, in Benghazi, Libya.
The Republican Party House of Representatives' Committee on Benghazi released its Benghazi report on Tuesday, with the debate about Clinton's role topical and front page report for many newspapers.
After several months of talking about Benghazi and how the four Americans lost their lives, due to  the tardiness of some government officials at the state department, the report seems to have nothing new than what the public already know about the role of the then secretary of state, the New York Times said in a report. The committees' report thus represents a reminder about the past and some new angles about some government departments' shoddy roles.
But the report certainly re-echoes the role of Clinton as secretary of state. Is Clinton's role as secretary of state an asset or a baggage in her current for the office of the president? Many observers, after considering the Benghazi episode and Clinton's use of personal email server, think that her time as secretary of state is much baggage than asset.
They wish that Clinton did not serve as secretary of state, and that if she had not served as secretary of state, there would been no Benghazi and the personal email server issues to discuss about her. They talk about an appointment that was a blessing but one that has seemingly turned into a curse.
Clinton was close to achieving her dream for the office of the president the first time she ran for the office, before her defeat by President Barack Obama in their party's primaries. She is once more close to her dreams, with her victory at the party's primaries over Bernie Sander. Although, Sanders has managed to do more damages to the Clinton's campaign with his robust debate efforts, but the issue of Clinton's role as secretary of state, the Benghazi issue and the use of personal email server stand as sore thumbs and capable of removing the asset, which her title as secretary of state would have given her.
Apparently, there was no love lost between Clinton and her boss, President Barack Obama. Despite Clinton being under investigation for her use of personal email server as secretary of state, President Obama has endorsed her, and he says his former secretary of state is the most qualified for the office of the president as a former secretary of state.
However, many observers see President Obama's endorsement of Clinton as a return of the roles that the Bill Clinton played in his reelection in 2012, when with a single speech at the party's convention, he brought Obama's re-election back to life from the brink. Without the need to give back for the good a past deed, people have wondered, especially among the Republicans, about a president could have endorsed a candidate under investigations.
There are other people saying that if Clinton has not been under investigations for her role as secretary of state, politicians in the opposition would have any reason to question her endorsement by the president. It is one reason that her role as a secretary of state has become more of baggage than an asset. Another decision by her campaign capable of dooming her presidential dream is the unconfirmed information that she has a plan for a female vice-presidential candidate.
Many of Clinton's admirers are saying that Clinton has never said that America never lost anyone in Benghazi, Libya. The picture above seems to contradict them. This is where the issue of trustworthiness and its opposite come in. Well, curious observers are saying laughter that anyone capable of saying what various political blocs want to hear can become president and that it does not mean the candidate is the most qualified or the best candidate.
It is the ground Clinton currently stands, close to her dream. But observers warn that the situation might change, and that it is too early to crown the King or the Queen, until the King or Queen makers have voted.