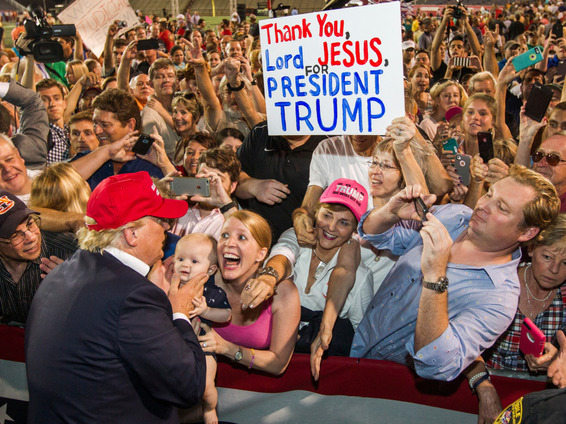 Donald Trump and some of his many admirers.(Courtesy:teenagepolitics blog.wordpress.com
Some Republican party bigwigs can be equaled to Zika, an ailment that causes deformity in children from the womb, currently causing concerns to the human community. Many people are saying that by the time the party finishes with its primaries, it may equal to a baby that has been deformed by Zika and no thanks to the human Zikas in the party.
Donald Trump can be anything that everyone who don't like his campaign mode has tried to qualify as one derogatory personality or another. But his supporters are saying that even if Trump is a leper and they have chosen to vote for him, the tenets of democracy is that he be allowed to play the role that humanity has placed on him and not deny him because of who he is. Some people are asking the that if trump were to be a gay candidate, would depriving him not have attracted the liberals' condemnation?
Many people are saying that what is happening in the Republican Party is discrimination at its best, because they say that if Trump belongs to certain families in the Republican party, he would not have booby traps on his path to nomination. Many people remember Jeb Bush convincingly telling Trump during one of their debates that Trump would not make the nomination, all because of a disagreement with Trump on issues.
All right people say that Bush has a right to disagree with Trump, but that Bush has only one vote against millions of voters who have been voting for Trump. The excuse that Trump has no plan and that he is not a conservative and that based on his plans he cannot assuredly defeat Hillary Clinton or any of the Democratic Party presidential candidates in the general election is seen as a ruse by many observers.
Every voter is said to have just one vote and if millions of voters are voting for Trump despite the many people's disagreement with the tone of his campaign, what has that got to do with deciding to defeat him unilaterally based on a phony general election polls. And unless the American democracy is no longer a universal democracy, and that the American democracy has become one of those Third World democracies, which are called different names such as demoncrazy.
With the disenfranchisement of millions of Trump's voters in Wyoming and Colorado based on what the party calls following the rules, observers know that it is part of the fulfillment of the ruling families in the Republican Party to throw away a candidate they perceive as a stranger and capable of exposing the evil in the party if allowed to have control of the party. Imaging the party's faceless chairman telling the public that if Trump wins the nomination, he may not be given control of the party, and that there would be no following of precedence.
Everyone know that there is no following of precedence in the party's determination to block Trump at all cost. The goal post was moved from Ohio to Wisconsin and now to taking the delegates from Trump in Wyoming and Colorado and giving them to Ted Cruz. Still, Trump is yet leading Cruz with close to 200 delegates. The goal post has again been moved to California, believing that Trump's anticipated sweeping victory in the North East may undo the bid to oust him illegally.
The Zikas in the party are leaving nothing out of their evil plans toward ensuring the party looks like a deformed baby after the convention in Cleveland, Ohio. Whatever happens to the party during the convention will not be Trump's cause, but that of the party leaders who are doing everything in their power to scheme Trump out. Trump has merely told them the effect the leaders' untidy decisions would have on the party.