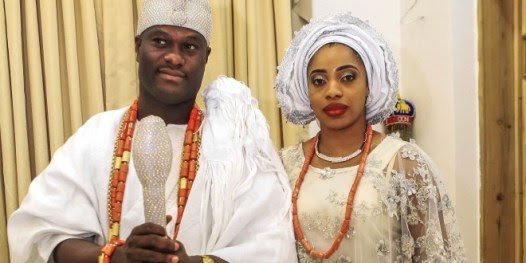 Oba Ogunwusi and Olori Wuraola
A statement by Olori Wuraola Ogunwusi that the affair between her and the Ooni of ife has  ended, terminates the speculation about their marriage.
It proved that the marriage between Oba Ogunwusi and his wife was not just on trial or crashed, that the woman had decidedly move on.
It was not a happy ending. It was why the Oba and the Olori first allayed speculations.
Those who understand the pain of separation of two people, who both have vowed to live together until God do them parts, will know that no such dissolution comes with happy ending.
One cannot blame the Oba Ogunwusi for trying to work behind the scene to resolve issues, and making sure that the truth has been held back for the time being. But for all who have read the story of the trouble, between Oba Ogunwusi and his Olori on one hand, and between the Olori and sisters of Oba Ogunwusi, would understand the storm the couple may have found themselves.
A marriage is supposed to be between two people, but in some parts of the world the tradition says that a marriage is between two families. Two individuals can manage to keep their own secrets, but such situation is difficult to manage when it involves third parties.
The occurrence in Oba Ogunwusi's palace does not mean he is imperfect. No man can be perfect concerning marital issues. But as a king that his entire constituent look up to in traditional and cultural issues, the marriage between oba Ogunwusi and his Olori ought to have been explained to both Oba Ogunwusi and the Olori from inception of their decision to be together that they have to act to be good example to people in their constituent.
It is very rare to hear a king in Yoruba land separating from a wife as a father figure, not only to his wives but to all in his constituent. The Olori ought to have been told before coming into the marriage that a king in Yoruba land does not marry just one wife, especially in a city regarded as the root of the Yoruba people. And the elders failure in traditional investigations about the future of the man and the woman in marriage is beyond imagination.
Undoubtedly, modernism may have intruded into what should be primarily a traditional affair. The fault does belong to either of the couple but their advisers. As an aspirant to the throne of Ile-Ife, Oba Ogunwusi ought to have been happily married to more than one wife before acceding the throne of his fathers.If he was struggling with marriage, i is the duty of elders to find out the cause and ensure that a marriage while on the throne is fortified.
Marriage before acceding the throne ought to have been one of the qualifications required aside from coming from a ruling house. But rushing into a marriage soon after his coronation and the sudden end of the marriage explains the shortcoming in the package of the entire affair of the coronation and the marriage issue.
Olori Wuraola's statement will undoubtedly be a source of peace for Oba Ogunwusi, since the woman herself has decidedly thrown in the the towel in the struggle for his highness attention.