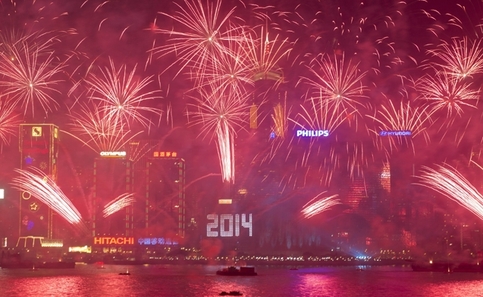 New Year in Hong Kong (Courtesy:www.scmp.com)
Dancing into a New Year can be spectacular as witnessed across the world from New York to London, Paris, Lagos, Cape Town and Hong Kong.
Although, already an annual ritual, people moved their feet and body to the rhythm of lovely music at the Times Square in New York and watched the ball dropped to herald a New Year.
In London, people crowded the banks of the River Thames and the streets of Edinburg and people shouted 'Bonne Annee' in Paris to welcome the New Year.
Welcoming  a New Year is a universal and worldwide affair that irrespective of tribe and religion. People say they enjoy the merry making, because it is good for the soul and the body and the happiness is seen as a right that no circumstance must be allowed to deprive one of it.
"The day you were born, you moved your arms and feet in rhythmical gesture to your own song (your crying) without which one would have been declared dead at birth. Your song and your dancing feet made the nurse announced your safe arrival that led to the joy that eclipsed the household that begot you," were the thoughts in a mind as a homeless guy one would have thought as insane walked into a train's car on a journey from Brooklyn to Manhattan, beamed with joy and began a sermon about struggling and surviving another year and he won hearts.
He said that life could be hard, especially for people working round the clock and that the urge to sing and dance may have been negatively impacted by the struggle for survival, but once in a year people seek places to pray, sing or dance giving thanks for surviving a year of struggle for being alive and breathing the fresh air and the only thing voodoo economists have not commercialized.
His condition and sermon reminded listeners of Nelson Mandela's quotation that "The greatest glory in living lies not in never falling, but in rising every time we fall."  He said that no matter one's circumstance in life, people should believe this New Year may be the year of change and that people should begin it with singing, dancing and exuding joy with determination to work toward achieving desirable change and hoping that his own homelessness caused by a billionaire mayor's policies would end with the coming of a new year and a new mayor.
Virtually everyone in the train's car opened their purse for him convinced of the figure he gave as the rate of homelessness in New York City as over 70%, that his own was not his fault and that what happened to him could have happened to anyone just like it had happened to many other adults and children during the former mayor's reign.
Just like the people in the train, not everyone was at the Times Square. Some people were with family; others went to Church and others were at the clubs and bars where they did justice to Remy Martins and Coquito. It was a time many people wanted to take off from work to be with family or find somewhere to cool off welcoming 2014. And a time some people say will herald call out from work on a New Year day by essential services workers who may have had a fill of the Eve's night.
While New Yorkers awaited the New Year five hours away at 1900hrs, it was already New Year in Europe and Africa; while the people in Asia were already comfortably in the New Year.
Comment Form is loading comments...
NEWS AND FEATURES
News & Features Around The World