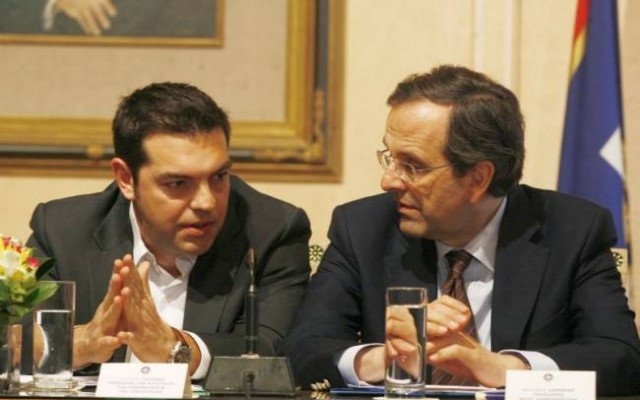 Alexis Tsipras and his predecessor
Mismanagement and graft are often responsible for a country's inability to manage an unexpected hard economic crunch. Because politicians hardly remember the lessons they are thought as new drivers, to keep a good distance following a vehicle on the road to avert losing control in case of a sudden occurrence capable of causing havocs.
Leaders in many countries are of course like reckless drivers, who drove mindless that anything could happen on the road or that the vehicle is capable of developing mechanical faults.
When the sheep is down like the case in Greece, it is the people - the rich and the poor - who have to grapple with difficulties of survival, when the politicians have changed the baton in an election, and a new leader is scheming to correct the evil caused by a predecessor.   However, there is a lesson to learn from Greek's insolvency compared to certain countries, who have not been declared insolvent but are already owing workers' salaries. News reports say that soon Greece may be unable to pay civil servants.
In Nigeria, many civil servants in the Federal and the States have been without pay for six or more more months, while several pensioners entitlements have hanged in the balance. There have been arguments that the reason for the unpaid civil servants' salaries in Nigeria was caused by a sudden drop in allocations from the Federal Government. But some curious observers have said that some of the state governments currently owing their workers have diverted the money for the workers salaries to fight the last election campaigns.
If a country like Greece that is still able to pay its civil servants is having next to death economic experience, what would one say about a country that has lost direction in every economic sense? A man I met and had an opportuned interview explained why a country like Nigeria will have money from Petroleum to take care of excesses from lack of of frugality, and a country like Greece would not.
According to this man who says he has retired from the civil service in New York City after 30 years of meritorious service, Nigeria has Petroleum it exports, but Greece has nothing it exports apart from its civil servants. Speaking further, he said Nigeria can be lucky as it has always been to get a rise in the prices of petroleum and use the money to offset whatever money it has fallen short of in the payment of workers' salaries.
Just as he wonders how a country like Nigeria with so much money owes its workers, he says Greece has nothing it exports aside from tourism. Suddenly, he asks: How will Greece get the money to pay back $300 billion it owes its creditors? When asked if the country owes that much? He quickly adds that the real amount the country owes is $340 billion and not $300 billion. He says the problem with Greece may have been its generous civil service package that makes every retiree a rich person. He says there will be a limit the country can shoulder the burden of the generous civil service retirement package.
Whether one is rich or poor, economists have said paying attention to one needs and not wants, is a way to avoid unpleasant situation of going broke and be at the mercy of creditors, because creditors want to be paid back their money. My impromptu interviewee spoke about the 20 years living in a two bedroom apartment in a building on 32 Street in Manhattan near the Empire Building, where he paid about $225.00 rent a month around 1969. But when the landlord wanted to make money from his property with rent looking upward, he said the landlord gave him more than two years worth of rent to get him out to make more money from his property.
He asks how much the rent around the Empire State Building will be now. We both think the rent may be around $3000 to $4000 for a two bedroom apartment. He said the rich people always look for means to make more money, because it is not comfortable to have been there and suddenly find you are no longer there. We both agree that no one will like to fall from fortune to misfortune and that it is misfortune to be poor.
And that if you are poor and your employer does not pay your salary for six months, it is equivalent to sentencing one to a period in hell. How do you pay your rent and other bills and feed your family? In America, if government owes civil servants and it is discovered the money for the workers' salaries have been diverted for political campaign, many people in the authority will go to jail, despite the looseness the Supreme Court ruling has done to the  campaign finance laws, which has made many Americans express preference for a stricter campaign finance regulations.
NEWS AND FEATURES
News & Features Around The World