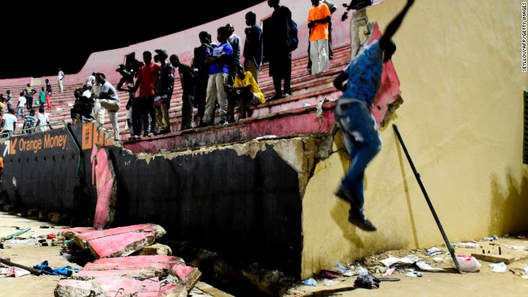 Observers looking at the collapsed wall
A wall fell on soccer fans at a stadium in Dakar, Senegal on Saturday and killed eight fans, accompanied by panic and stampede, according to a report by Kenya Daily Nation.
Senegal Sports minister, Matar Ba told news reporters that a young girl was among the dead, while about 60 others were taken out for medical attention.
An eye witness, Cheikh Maba diop said, "All of a sudden, when the wall fell....we knew exactly that some of our own had lost their lives, because fell directly on people.
The stadium was described as filled to the brim by fans, who came to watch a long awaited match between two local teams - US Ouakar and Stadede Mbour.
The eight fans who died in the stadium wall collapse went to the stadium to watch soccer match to be happy and not to die. The stadium wall collapse undoubtedly an accident and consequently the death of the victims. But the statement on the tongue of many observers is that something must have been wrong with the wall before its collapse on Saturday.
​     Questions are being asked about the state of the wall. Did the stadium showed any sign of a bad situation before Saturday, but disregarded by the authority? How long ago was the wall constructed? Was their any water leak into the wall from anywhere capable of affecting the wall, which ought not to have been the case?
Soccer is know to be a popular sport in many of the African countries that attract a large and lively crowd of team supporters, among whom are drummers and singers, encouraging the teams toward victory. It is therefore a painful death for anyone in a lively mood to suddenly hear the collapse of a wall on him her, in peace time when no one expects an enemy planting a bomb to kill imaginary enemies.
Soccer authorities in Senegal need to get to the bottom of the cause of the wall collapse to forestall future occurrence, while other countries in the continent should also investigate various wall in their stadiums. People should not be scared away from past times like watching soccer  matches to keep happy for the fear that a wall may collapse to end their lives.
Of course, the need to investigate the wall collapse is to punish violations to avoid future occurrence of such collapse and loss of precious lives, in addition to encouraging further attraction to the stadiums, to encourage further soccer development and not scuttle or kill it.
HTML Comment Box is loading comments...
NEWS AND FEATURES
News & Features Around The World