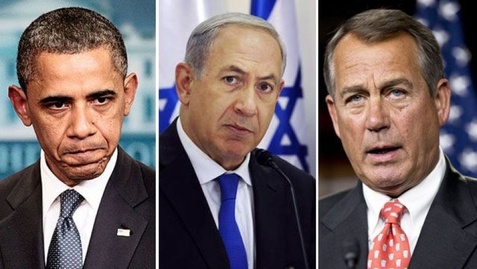 Obama, Netanyahu and Boehner ( Courtesy: carolineglick.com)
The United States Congress has told Iran that the outcome of its meetings with the U.S Secretary of State, John Kerry, will not be ratified by the Congress. The message further widens the difference between the White House and the Congress over Iran's push to acquire nuclear power.
Israel's prime minister, Benjamin Netanyahu last week disapproved the U.S having any deal with Iran over the latter's plan for nuclear power. Netanyahu made his decision as Israeli's PM known in a speech to the U.S Congress.
Netanyahu said that because Iran is against the ISIS or fighting alongside coalition forces, is not a reason to trust it with any deal for it to acquire nuclear power.
As Netanyahu delivered his speech, the news said John Kerry was meeting in Netherlands with Iran's foreign minister, Muhammed Javad Zarif. Yet, in another report, President Obama made it clear that Iran cannot acquire nuclear power.
President Obama tries to assure the world that the U.S has Israel's back, despite whatever meeting between the U.S and Iran's foreign ministers, and disregarding Netanyahu's fear over Iran's effort to have nuclear power in anyway and for any reason.
But observers noted that Netanyahu did not come to the Congress for a speech through the back door. They said he was invited by Republican Party controlled Congress. And that there lies the discomfiture of the cold relationship between the White House and the Congress and the gains of lack of cooperation between the Republicans and Democrats.
The Democrats did everything they could to discourage or stop Netanyahu's speech to the Congress from holding, but established lack of bipartisan between the two arms of government paved the way for Netanyahu having his way.
The Democratic leader in the US House of Representatives, Nancy Pelosi said Netanyahu's speech was a an insult to the US intelligence, meaning that the Democrats did not buy the import of Netanyahu's message that Iran needed to be completely isolated. Of course, some Democrats abstained from hearing Netanyahu, while The Republicans hailed the speech.
Israel and the US are friends beyond politics and diplomacy. Israel does not want diplomacy with Iran over its desire for nuclear power as an enemy that cannot be trusted. It wants the US on the same page with it, to shun Iran and let it know without mincing words that it cannot acquire nuclear power.
The US wants to have an independent decision on its international relations that is not based on following the wish of any country, friendship or no friendship.
But Iran has said time and time again that its decision to acquire nuclear power is for industrial purpose. However, there has been reports showing that Iran has more plans for acquiring nuclear power than mere industrial use.
There was much anticipation over Netanyahu's speech to the U.S Congress, especially because of the division it triggered between the Democratic Party's White House and the Republican Party controlled Congress.