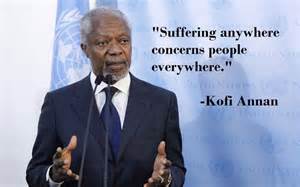 Kofi Annan (Courtesy: Pinterest.com)
Over 100,000 people have died in the Syrian war. And those who have not died live with the fear of imminent death, aware that what has happened to those who have died can also happen to them. A large number of others have fled the country to neighboring countries and to Europe, and some have died trying to cross the Mediterranean Sea to Europe.
The war has not ended. Bashir al-Assad, the Syrian strongman is still in office, and so also are many of his antagonists. The death of enormous number pf people and the enormous misery the war has caused to Syria and the global community is of great concern to the United Nations.
The world body has been working toward peace and ceasefire since 2012. But Assad's antagonists want nothing, except Assad leaves or their conditions are respected. Assad and his antagonists remain the two elephants in Syria and the ordinary people represents the grass, and when two elephants fight, it is the grass that suffers.
The ordinary Syrian people, who have no traveling passports and cannot even talk of applying for a visa to any country, safe running across the border to neighboring countries, have been caught in the crossfire between Syrian government's military and the armed men fighting for the other people agitating for freedom and democracy.
Assad is said to be ready for a ceasefire, but the freedom fighters don't want that. Should  the UN fold its hands and do nothing?
The number of people who have reportedly died in Syria are humans and not animals. The Lord is still the shepherd of the whole world. But since the lord cannot come down here and oversee the management of crisis to effect ends quickly based on human desire, some more powerful people among humans have assumed the role of assisting God in shepherding the world, intervening in any part of the world to manage crisis.
Libya and Syria are two interventions that have left no good story. These interventionists are also members of the UN. When they want to intervene, they go to the UN to seek approval before they send their bombers to any country on agenda, but when their mission fails to produce expected result, the UN or the International Court in the Hague hardly do anything to bring them to judgment as a way of stopping their interventions to become an attitude and a way of life injurious to ordinary people.
When they go on their intervention, they work so hard to avoid mistakes, but despite all their human efforts, mistakes happen and the people affected by murderous onslaughts due to these mistakes are humans and not animals, just as it has happen ed in Libya and it also playing out in Syria. Many people believe and say it everyday that Iraq is part of the murderous mistakes by intervening powers, because they say when these powers failed to show the world the weapons of mass destruction in Iraq, they hide under the cloak of saving the Kurdish people from Saddam Hussein's undemocratic rule.
They took out Hussein and they left Iraq in ruins. They took out Muamar Quadafi and they left Libya in ruins. They have been working to take out Assad, but their efforts have not been fruitful and Syria is already in ruins. Egyptians voted for a man they wanted as a president, because these intervening powers said that the man. Mohammed Morsi, who Egyptians voted and had as a president was not a saint, a process was put in place to oust him. In the process, over 1000 souls were killed in Egypt to foist a new leader on Egyptians and the man Egyptians willingly voted sent to jail.
​    Morsi and his family has God to thank as their shepherd and that Morsi is somewhere alive. Morsi and his family are not so unfortunate like the Hussein of Iraq and Quadaffi of Libya.If it is just the death of Hussein and Quadaffi, people say the matter would have been manageable. But people are wondering about what has become Iraq and Libya, where human lives are no longer safe and various militias are struggling for power. The Ira government has been struggling to push out ISIS from its territory and Libya is a fragmentation of violence.
Yet, people who are players in the mayhem these countries have experienced are alive and no one is calling to question them of their role in the violence against humanity. It is to safe lives, when they go to intervene. But when they finish, they leave with lives destroyed and humanity in peril.
NEWS AND FEATURES
News & Features Around The World