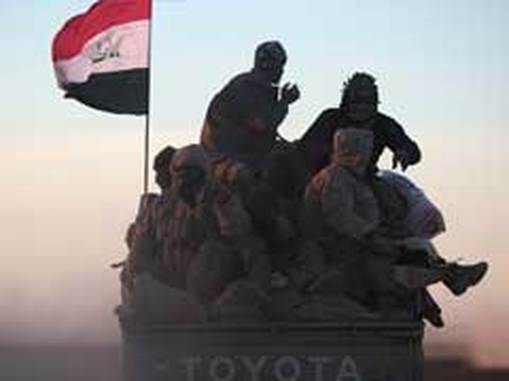 Iraque soldiers going into battle against evil (Courtesy:NDTV)
Some children have reportedly been treated in Mosul, Iraq, for effect of chemical weapons. Meaning that the ISIS occupiers of Mosul may have possessed chemical weapons.
This bring to the fore, watching over the weekend, how fire from guns on an armored car, fly over a long distance to its target in the embattled city.
Although, about 45,000 residents have reportedly been evacuated from the city before the beginning of the battle, but one can still imagine what would become people, who may have been unfortunately caught between the deadly fire power of the combatants.
ISIS wants to remain in the city. The Iraques want them flushed out. The Iraques have the support of the international community, to whom the ISIS is a pariah. Iraques have been witnessing evil and no one is sure about the time that evil will cease the country. If the ISIS is eventually thrown out of Mosul, will it be the end of ISIS in Iraq or will it regroup or not regroup in another location in the country?
The question is not easy to answer. iraq has become a sort of battlefield between the good and the evil. The evil does not want to go away, but the true Iraques and their friends are up and giving the evil a good fight. ISIS is evil. And evil never wins a good fight. It is in trouble in Iraq, Syria, Nigeria, Somalia and Yemen. Afghanistan too, lest we forget.  And everywhere that it has challenged the way of life of peace loving people. But will evil ever die?
If trouble has power to kill, may be Iraq would have died by now. Just like Syria and libya. But many Iraques have died, just like many syrians and Libyans. But for the Iraques deaths not to be in vain, the Iraques who are still living have no choice than to fight to win. Fight ti finsh.
Though, it is tough for anyone facing the fire power that the Iraque face, which they have not created in the first place. But what choice do they have between seeing their home gone up in flames and helping in putting out the fire for the sake of their children's future? They are certainly fighting to quench the the fire of evil, for the good of their children and country. Everyone is concerned about the evil that ISIS has constituted itself around the world.
Francoise Hollande of France said that the ISIS may become history in Iraq in seven months. Has he just said or did three years ago? Well, President Donald Trump of the United States said plans are on the way to eliminate ISIS. It is everyone's prayer for this evil to be taken out. Meanwhile, the President Trump has removed Iraq from the latest travel ban by the U.S., according to news reports.
NEWS AND FEATURES
News & Features Around The World