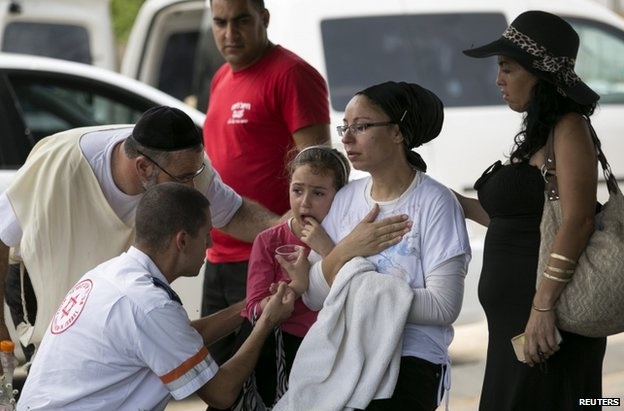 A woman and her daughter receive treatment for shock in Ashkelon
17 members of one family are reported to be among those who have died in Gaza from an Israeli missile attack on Gaza, the BBC has reported. Palestinian militants are firing rockets into Israel and Israeli military has been sending missiles in torrents into Gaza. The dead are piling and there don't seems to be an end in sight.
Already, about 160 Palestinians have been killed, health officials in Gaza told news reporters amid Israel's insistence it will continue shelling Gaza as long as the Palestinian militants don't stop sending its rockets into Israel.
Shelters have become home away from home for Israelis running away from Hamas' rockets. Israel explains that its mission is after Hamas militants, terror, sites and homes of senior Hamas' officers. But the BBC reports  that the United Nations' estimates 77 percent of the dead in Gaza are civilians and the UN has called for ceasefire.
A set of BBC published photographs show children caught in the web of the crisis sitting and watching development from a shelter; one picture shows smoke in three different spots in an Israel neighborhood after Hamas rockets hit, another picture shows people gather to watch an expired Israel missile on the ground in Gaza, a woman and her daughter are treated for shock after a rocket hits Ashkelon, a Palestinian boy sits on the floor with back on a van weeping at his father's funeral in Gaza.
Some people are calling for peace, but combatants on both side of the fence are deaf to reason. Israel say it has dropped leaflets to people in Northern Gaza to evacuate the area before it begin its bomb rain, but a Palestinian spokesman tells the BBC that there is no place for residents to hide, because Hamas is integral part of the population. Israel's prime minister, Benjamin Netanyahu says the fight might take a long time before it will come to an end.
This is not the first duel between Israel and Hamas, but people are praying for it to be the last. The latest warfare started five days ago over misunderstanding and disagreement following the kidnap and killing of three Israel teens, followed by vengeance kidnap and  killing of a Palestinian teen.
Israel's police was reported to have arrested six men described in news reports as extremists, but no arrest had been reported in the case of Slain Israel teens.
NEWS AND FEATURES
News & Features Around The World