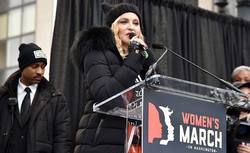 Madonna
Service Madonna's Outburst about an intent to blow up the White House is the major issue from the women's march of Saturday in Washington.
​    The women were protesting against President John Trump's political ascent.
In her speech, Madonna reportedly said that she had thought a lot about about blowing up the White House, but knew it would not change anything.
People are saying it meant she has intent upon which she has devoted lots of thoughts, but becomes remorseful about committing the evil, because she knows it would not change anything.
Madonna's expression of intent to blow up the White House, though she later changed her mind has attracted concern in legal circles, concerning reports that her state has drawn the attention of the United States' Secret Service and unconfirmed reports that the Secret Service has begun an investigation into the matter.
Some observers think that Madonna's disclosure should not make the Secret Service waste their time, when they have more security issues to attend to, believing that the singer may not have been serious and that she may not have had any thought about blowing up anywhere. People are saying that she may have said that she said in need of something relevant to say. People are saying that it is best to ignore Madonna, who does not lack anything, but does whatever she may have done for show.
But others who view her statement as far too much to be desired say it is how people carelessly make statements lacking the knowledge of the import and throw themselves in avoidable trouble. They say it is true that the U.S. is a country, where people have freedom of expression under the law, but they say for someone to come out and confess that she has had an intent to commit evil against her country is too much. 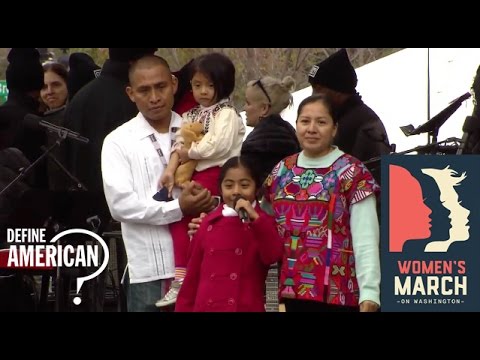 Sphie with her parents
​    Aside from Madonna's outburst, there is the six year old girl, Sophie Cruz, who made a statement concerning her parent's immigration status and other undocumented migrants, which reported drew applause.
Sophie's parents, according to her, has been living in the U.S. for ten years without papers. Therefore, she said she was at the march to tell the children not to be afraid.
​   The report said that it was not the first time sophie had been in the public that drew attention. she once came before the Pope pleading for the Pope to intervene in seeking immigration consideration for her parents to remain in the U.S. and for their family not to be destroyed.
The report said that Sophie once attended an occasion in the White House, but her parents stayed outside, because they lacked security the pass  without the social security numbers.
Reports does not show whether is acting on her own, or whether she is an instrument in the hands of her parents. Did she write the letter packaged that she delivered to the Pope, when she first appealed to the Pope or someone else wrote the letter and she was made to deliver It? Why did the parents choose to remain four years in the country without papers before her own birth and still without papers six years after her birth?
Does not it appear necessary to Sphie's parents to have papers and get attorneys to work on their behalf toward adjusting their status? What efforts have they made toward obtaining necessary papers to remain in the country without fears of deportation?
Aside from these two issues, the women's march was just like other protests across the country, before the Friday's inauguration ceremonies in Washington, said to have been sponsored by wealthy fellows, who hate to see President Trump's political ascent.
Reports show that the women protests went beyond Washington, that it was also held in some other parts of the world women to draw attention to issues that matters to women. One report said that the women said they were not going away soon, drawing questions about where they had been and why they did not use their voting power, instead of wasting the time they should have used for other important needs.
NEWS AND FEATURES
News & Features Around The World