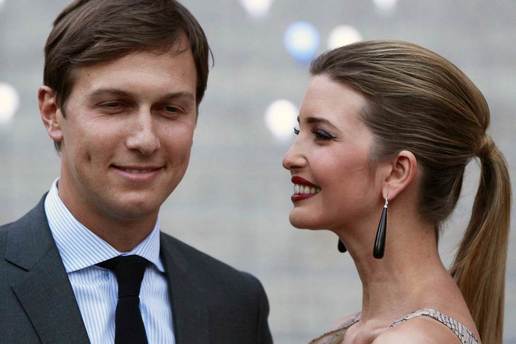 Jared and Ivanka
Jared Kushner left the senate intelligence hearing this morning and headed back to the White house. While still on his way, the Fox News kept its viewers posted about Kushner's journey to the White House, expecting him to talk to the media, about his encounter with the senators.
Just about seven months or so ago, Kushner was relatively unknown, other than he was son-in-law to Donald Trump, the president elect.
But as soon as President Trump was sworn into office, the star of Kushner began to rise as a close confidant of the president as one of the people who had worked on his campaign.
The words of Shakespeare come aloud here, "Some are born great; some have greatness thrust upon them and some achieve greatness."
​      As a son-in-law to the president, he could have been there without having offered any help to his father-in-law. But he did. And he has benefitted, just like his wife, Ivanka, daughter to the president.
It is also possible for a son-in-law to work for his father and ends there without his presence getting louder than as it should be. But now through accusations of collusion with the Russians, Kushner and one of Trump's sons became guests of the senate intelligence committee, with all eyes following them. Before the invitation to them to attend the senate intelligence hearing, whoever did not know them before would have known them now.
The New York Times' lead story this afternoon is about Kushner and his meeting with senators. He said in his statement to the senate intelligence committee that he did not colluded with the Russians and that his meetings last year were not part of any attempt by Moscow to disrupt the election.
“All of my actions were proper and occurred in the normal course of events of a very unique campaign,” Mr. Kushner said on the White House grounds. “I did not collude with Russians, nor do I know of anyone in the campaign who did," the Times quoted him. Manifestly, Kushner is getting more and more into the limelight either for good or bad.
Human life is about struggles. Kushner found himself in a struggle to help his father-in-law in a tough election campaign. Though, Trump himself showed enough wisdom and managment sense in the campaign, changing his personnel from time to time, appointing new ones, aligning with the demand of every stage of the struggle.
The Trump's victory also showed that nothing can come without struggle. He went through the Republican Party primaries with the sweat on his brows almost turning to blood. No one thought he could clinch the party's nomination. When the cloud seemed to have assailed him in his struggle against Ted Cruz and all the world almost against him, he went for Mike Pence as vice presidential candidate, and that sealed his defeat of Cruz, convincing Republican voters that Pence as one of them means that  victory in the election would be Republican Party's victory.
Recent revelation by Hillary Clinton that the Democratic Party failed to make enough money available for the election fight in the battle ground states as one of the reasons for her lack of enough campaign in those states and loss of the election shows how the stars have aligned to give Trump the victory over her, despite her 3000 more votes in New York and California.
The struggle has not ceased with the allegations of the Russians collusion to favor him in the election. He has not shown that he is tired of the struggle. A special counsel is in place to investigate alleged Russian collusion and obstruction in regard to alleged collusion, prompted by the dismissal of James Comey as FBI director.
The way Trump has been challenging all those related to the case of alleged collusion so far, has not shown he has behaved in anyway like a man who has colluded with anyone to commit any crime. See how he has challenged his attorney general Jeff Sessions, about why Sessions recused himself, instead of joining the battle.