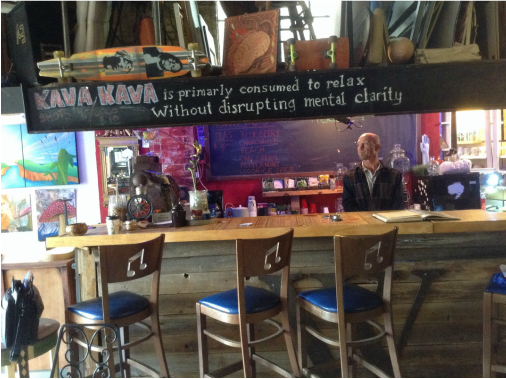 Darrien Borkel is the curator at Outlimits Art Studio on Franklin Ave. He said he had existed on the address for 20 years, while he had lived in the area for 30 years. He was born in Hicksville and had all his education in Long Island. he has a year book in the studio where photographs of all teachers who have been instrumental into developing his art education are printed.
Once inside the art studio, the serving of a drink from a bucket in under a platform in a bar invites curiosity. The drink is named Kava Kava, which Darrien said he first discovered in Florida and introduced in his studio on Franklin Ave. he said the drink completely relaxes one after consumption. Above on a lintel of the bar is an inscription, "Kava Kava is primarily consumed to relax without disrupting mental clarity."
Borkel said Kava Kava is made of water and kava root. He said he sometimes adds clove and pineapple, trying new recipes.
Elsa Corderon, a sales representative at Paper Tee, a clothing company in Manhattan said she likes Kava Kava. "It relaxes. I like it."  Patrick Willoughby, a patron at the studio said that Kava Kava relaxes without disturbing mental clarity.
Darrien said after his discovery of Kava Kava in Florida, the experience marveled him and introduced in New York, because he could not find such a drink anywhere in the big apple. Asked how he became an artist, the first inclination that drew people into the studio, he said his mother told him he used to draw on the wall as a child with his poop.
"I am self taught." Aside from being self taught, he mentioned Mrs. Arlene Goldfarb, whom he said helped honed his paling a line with paint brush. He Aldo remembered Jerry Warner, another teacher he said taught him how to use his eyes. According to Darrien, the eyes is useful in seeing and interpreting life and composing it into a painting to speak to people.
He said being an artist is not beneficial at all, except that people see your work and appreciate it, and that gives you joy. A painting hanging on the wall with an inscription "I had to choose him or the animals...We miss him sometimes" depicts his choice of art. He has been taught how never to allow mistakes to stop him toward achieving an objective he sets out to achieve. According to him, Mr. Zihal taught him to not allow mistake stop him on any painting irrespective of mistakes until the primary aim had been achieved.
Visitors are welcome into the studio through a door on the right out of two open doors. Immediately to the left after entry is desk on which there is a bust and in front of it is a visitors' register. Ahead is a picture on the wall that looks much like Michael Jackson, but on enquiry, Darrien said the photograph was John Lennon. Above atop of all the materials in the studio is a big black box depicting a commentary box with an inscription 'BOLLY' in red color displayed in front.
On the way out toward the second door are paintings of mushroom on the wall; a metal table with red leather cover without backrest and a table that has a copy of Page One - a New York Times publication cataloging major events from 1920-1978. Another painting has a Hippie van on a road; an old woman on top of her house thumbs up for the van and other ideas the painter, Davide Primerano - an Italian described as cool.
Outlimits does music events, paint jam that allows artists to come and paint with life music with Kava Kava helping to helping them to relax without disruption to mental clarity.
NEWS AND FEATURES
News & Features Around The World