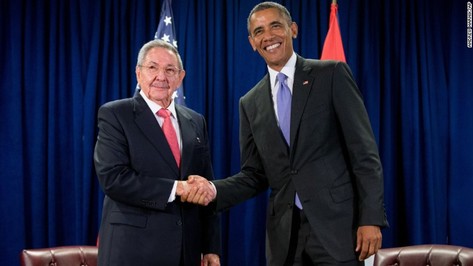 Raul Castro and Barack Obama
Elaine Dia Rodriguez is the director of Neighborhood Journalism that focuses on Climate Change. As a journalist worried by lack of freedom for the media in Cuba, he hopes that President Barack Obama's announced intention to parley with the alternative media as part of his visit to Cuba, will enhance the media's robustness in that country.
But the question is why should a journalist trust in a politician as the insurance for publishing the truth and not the reliance on the truth? And the answer is simple. President Obama is the leader of the free world.
Rodriguez and others who are worried about journalists' vulnerability to attacks have many reasons to think that a meeting with Obama could help curtail continued harassment, imprisonment, disappearance and killing of journalists around the world.
Hardly a month passes without a journalists getting into trouble, not for any other reason but for doing their work. For example, El Carabeno newspaper recently closed shop, when the government in Venezuela squeezed it out of reach for newsprint, accvording to a release by the Committee for the Protection of Journalists.
Godfrey Mwampembwa, a cartoonist in a Kenyan newspaper saw his contract ended without any explanation offered other than that the contract had ended. People think that the newspaper owner(s) may have had their ears filled with complaints from government operatives about Mwampembwa's cartoon criticisms.
In Lebanon, an appeal panel upturned an earlier conviction of Karma Khayat, a journalist who was ordered to pay $11,000 fine, because her station reported an interview with confidential witnesses. A Chinese freelancer, Jiajia, who works with website Tencent,  was reported disappeared between his home in Beinjing and his assignment post in Hong Kong, and his whereabouts unknown.
David Romero Ellner works as director for Globo Radio and Globo TV in Tegucigalpa, Hondura. He recently bagged 10 year jail term for defamation.
There is also another report by the CPJ about increasing arrests of journalists in Jordan that has tarnished the government's image. The report is about the crackdown on the Jordanian media that has reached its zenith, where websites are mandated to register with the government and a website's payment of 1000 Jordanian dinar as a fine for operating without a licence.
All the countries, where journalists have either disappeared, have been jailed for defamation, have been fined and the fine luckily upturned have their own version of democracy, just like America has it's own. But ask the journalist, he or she will tell you that some countries may be better for working as a journalist, but that hardly there is any country, where the journalist enjoys total freedom.
What has made Cuba a worse case scenario is that Cuba does not pretend to be a Socialist country, and that it is not a democracy irrespective of the United States' government's moves that have resulted in the restoration of diplomatic relations between the two countries.
Observers with the knowledge of developments in Cuba say that Cuba has tightened the noose against freedom more than it has ever done, following the renewal of diplomatic relations between it and the US, compared to the past. Of course, people ask that if Journalists are under attacks in countries that are not Socialist in orientation, what would one expect from an avowed Socialist country?
President Obama has said that his decision to meet with the alternative media is not just for the coverage of his visit to Cuba, but to begin a dialogue. And Rodriguez said the meeting with Obama by the alternative will not solve journalism problems, but that it will boost the profession's legitimacy and reduce journalists' vulnerabilities to attacks and deprivation of freedom to do their work.
NEWS AND FEATURES
News & Features Around The World