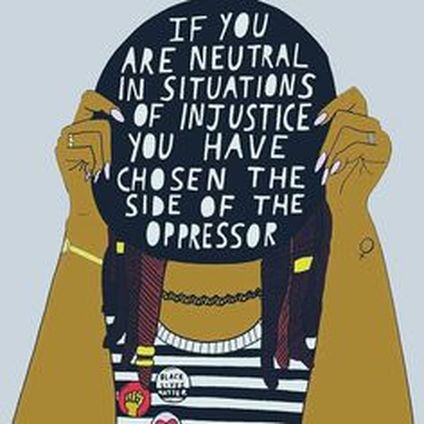 Courtesy: Pinterest
Injustice is detested by all. The perpetrators will also say they hate it, but it is the staple they live on and they cannot do anything against it.
Senior government officials and their cronies; politicians of all shades and characters and government appointees, will say they are against injustice and that they are working to ensure its eradication. But don't trust them. It does not matter whether they represent blue or red.
Ask them about what constitutes injustice, poverty and its elongation in the society will be top on the list. It has been like that for a long time, and yet poverty is still here and tall like the pyramids of Egypt.
As a fresh Journalism graduate from college, you think it is part of your responsibility to fight injustice, apart from your natural core as a reporter, but your employer or the corporation that has employed you think otherwise.
As soon as you get employment in one of the major newspaper or television houses, you soon discover that the first lesson to learn is to adjust to do the political bidding of the owner(s) of the organization or get out. Of course, if you don't get out, you will be kicked out with time, when it is discovered that you have refused to toe the line. Then, you will discover that newspaper and television houses are either liberal or conservative, and you have to identify with either of the two political ideology and give up your freedom of thought.
The loss of the freedom for free thought by the fresh Journalism graduates is the first major obstacle to fighting injustice and poverty in the society. Before the advent of Journalists' ownership of own their media houses, the temptation for fresh Journalism graduates was to get employment in one of the major media houses owned by billionaire liberals or conservatives ideologically bent owners as foundation for their professional practice. The destruction of the professionalism by political media house owners have resulted in smart Journalists seeking to be owners of their businesses.
​     The change does not seem to have positively affected Journalists' fight against injustice, because the differences in political ideology has destroyed the drive for independent thought, just like the issue of doctrinal differences had tore the Church apart leading to schism. The growth of injustice and widespread poverty also stems from the ideological schism in the media promoted by media owners. This has thus make Journalists puns in the ideological warfare and instruments in the hands of wealthy media proprietors and corporations.
African politicians in particular delight in starting newspapers in pursuit of political aspiration. When you see a politician open a newspaper house and employs Journalists, it is not for the propagation of truth, the truth is in the version of the politicians's game to win election. One can imagine an environment, where every Dick and Harry seeking political office own a newspaper house with him or her a s publisher and the professional journalists as his or her minions.
The arrival of the internet that has made employment in the  media unstable for budding Journalists and has worsened an already bad situation. However, one good thing is the awareness the way the situation affects Journalism as being addressed in graduate Journalism schools' media ethics class, and that fresh graduate Journalists are benefiting for knowing that the proprietor who gives you a car, a driver and a house or millions, toward employing you to negatively control your thought and later toss you out of your position in his employment over disagreement for your upholding the truth, is not your friend but an adversary. And that if such a proprietor has his ways, he can do worse things, including taking the Journalist's  life, to deprive the Journalist his or her freedom of thought.
But Journalists wishing to begin own media houses still require lots of money and real professional agility and unusual the drive to survive - to beat the unprofessional proprietors to their games of manipulation of Journalists and the media for their own political gains. It is manifest that the revolution in the media is tilting toward the realization that many Journalists have begun studying the odious situation, where politically motivated media proprietors can make or destroy the Journalist, with a drive for new Journalism independence toward renewal of the fight against injustice and poverty in the society, unencumbered  by the malaise of politically motivated proprietors and corporations.
Widget is loading comments...
NEWS AND FEATURES
News & Features Around The World