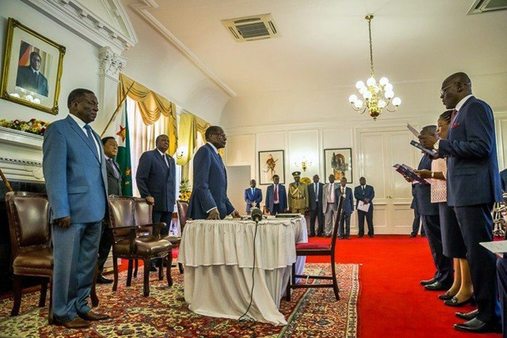 President Robert Mugabe holding court in Harare (Courtesy:BuzzSouthAfrica)
Raila Odinga, the Kenyan opposition party's presidential candidate has opted out of the new election scheduled for October 26, 2017.
The reason he gave for his decision is lack of assurance that the evil that bedevilled the August presidential election will not repeat itself.
Observers of political development in Kenya are not shocked by Odinga and his running mate's decision to drop out of an election they are unsure of its fairness, with all the characters that perpetuated the rigging of the August presidential election still in office at the country's electoral office.
The opposition party has asked that the men and women indirectly indicted by the Supreme Court's cancellation of the August election be removed from their posts and be replaced toward assuring the opposition that the October election will not go the same way of the August election, but rather than follow a path of decency, the ruling party insists on retaining all the tainted officers at the IEBC.
Additionally, the opposition party has accused the ruling party of introducing new election laws targeted to favoring the ruling party and the incumbent president at the polls. Of course, the ruling party wants another election as quickly as possible, saying it is certain of repeating its victory in the polls. The opposition has found itself in very difficult situation. It cannot embark on mass action, with the evil of mass death of 2013 still much in the news. The ruling party has capitalized on the excuse of shouting avoidance of a repeat of the 2013 mass killings to make the opposition seems powerless. With Odinga's withdrawal from the race, all ideas and suggestion are flying all over Kenya about the way forward. The ruling party supporters have their own ideas and suggestions, while the opposition supporters are saying that the end to kenya's political deadlock is not yet in sight.
In Zimbabwe, the succession battle has become so hot that the deputy president and Grace Mugabe, the wife of President Robert Mugabe, have become sworn enemies. Observers suspect Mugabe's wife as plotting to succeed her 93 years old husband, while the deputy president, Emerson Mnagagwa, is reportedly working behind the scene to obstruct her plans.
On Monday, news reports said that Mugabe, who had been silent and seemingly unconcerned by the rift between his wife and his deputy, came out charging with a demotion for his deputy, as punishment for daring his wife. There were rumors of the first lady poisoning Mnagagwa, when he was sick and hospitalized in August. Mnagagwa denied the allegation that he said the first lady poisoned him and accused the source of the rumors as spreading falsehood.
Now, Mnagagwa has been shuffled from the Ministry of Justice, Legal and Parliamentary Affairs to no portfolio at all, showing that Mugabe is on the side of his wife. Mugabe's action against Mnagagwa, rather than cool the political atmosphere, has sent a message out that the succession battle is not without him.
Mnagagwa, a long time ally of Mugabe, would now have to rethink his political future, endangered suddenly by Grace's ambition to succeed her husband. Observers say that Mnagagwa knows how Mugabe operates politically, and that there is every possibility that he knows to confirm his feud with grace as some people around him have tried would spell his political doom. And that his silence and effort to avoid  an open feud with Grace is to survive politically, since being alive is itself an assurance of later political reawakening.
Comment Box is loading comments...
NEWS AND FEATURES
News & Features Around The World