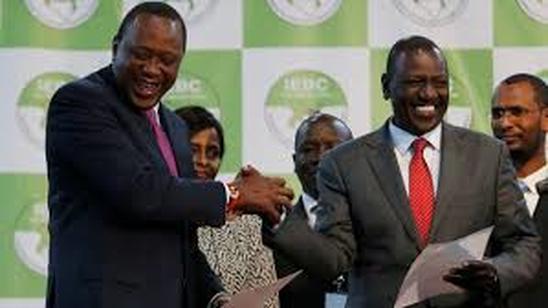 Uhuru Kenyatta and William Ruto posed with certificate of victory, and smiling with the country they lead on the edge
News reports said that 24 Kenyans were dead by Saturday, following announcement of the presidential election results, reportedly won by the incumbent, Uhuru Kenyatta.
Earlier reports put the number of the dead at 11 and then later went up to 24. It was not that the people went against one another and began killing each other.
​    It was the police, funded by tax payers' money, that reportedly killed the people protesting Kenyatta's reelection!
There were also soldiers on the streets with their guns and moving like they were looking for enemies in combat. This raises a question about a government's declaration of war against some of its own people, to curtail widespread protest against the incumbent's reelection or avoid a repeat of history and a journey to the Hague, for trial over political killings.
But curious people are saying that it is worse when the police that are supposed to maintain the law and order decide to open fire on protesters. Is not the government aware of the danger the country faces considering the country's recent political killings and the need to avoid a repetition?
It thus naturally leads to the a question about who may have ordered the police use of live bullets on protesters. Is that the way Kenyatta's government believe in avoiding the ugly past of political killings? Kenya's internal affair's minister and those above him charged for keeping the law and order must be made to answer for the killing of 24 protesters, who had committed no crime other than protest an election result. And the world has heard the government describing them as criminals. This is unacceptable. You don't unilaterally judge and condemn them, and then send your police to kill them.
Of course, it is regrettable the foundation on which the country has been built is one that one section of the country will be rejoicing for political victory over another, and the other in pain for consecutive loss of elections to the other section, that perceives itself as powerful than the other section entitled to the booties.
The words of Raila Odinga during the campaigns that it is time for people in his own section of the country to eat underscores the political inequality in the country. Now, people in Odinga parts of the country believe that they have been denied access to eat, and those who have been eating will continue eating, while they will continue in deprivation.
Those who consider themselves victorious are seen celebrating their victory and their elected president and deputy president, smiling with their teeth open, displaying their joy with certificates issued to them by the electoral body, when they should be busy calming nerves.
The election, though adjudged as free and fair by independent observers, has opened a new debate that Kenya requires a new political arrangement that will be inclusive, against the current situation in which one part of the country continuously produce the president and the other part is endlessly in opposition.
Before the election, two murders were committed, which showed that scuttling freedom of expression and possible election malpractices may have been undertaking. The first was of a young author said to have published a book critical of the government and in favor of the opposition, but disappeared few days to the launching of his book.
The second murder was that of an electoral officer said to be charged with the technicalities of the computer system in the electoral body's office. There has been no news about the whereabouts of the young author, and the law enforcement have not said anything to show a lead in the investigations into the murder of the electoral officer, few days to the election.
The killing of protesters by the police seemed premeditated, aware that the election results may be protested, the authorities got the police ready to mow down defenseless protesters to keep the protest from spreading.
NEWS AND FEATURES
News & Features Around The World