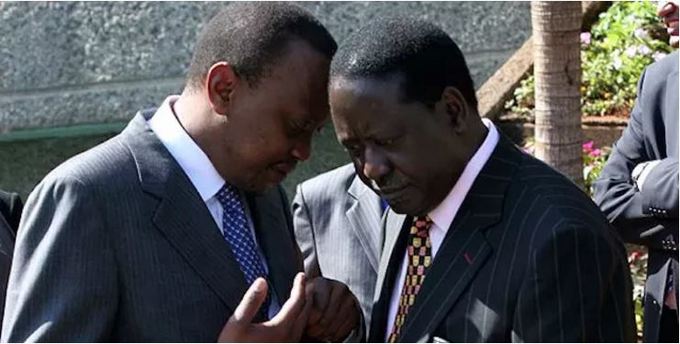 Uhuru Kenyatta and Raila Odinga waiting to slug it out on August 8
Kenya will hold its general election on August 8.
All eyes are on the presidential election, between the incumbent, Uhuru Kenyatta, and the opposition rival, Raila Odinga.
Presidential election in Kenya has not stopped creating fears in the country, Since the 1000 deaths over election fight in the country, before the election of the incumbent president, which resulted to the president and his deputy, Williams Ruto, to be guests of the International Arbitration Court in the Hague.
The last week murder of Msando, an electoral officer, two weeks before the coming election on August 8 has heightened the fear of the unknown in Kenya. Consequently, President Kenyatta has urged security forces investigating the murder to get to the roots of it as quickly as possible, to help allay current fears over the elections. The president has also acceded to the request of the United States' FBI and the Britain's Scotland Yard to be involved in the investigations.
The opposition leader has been reported as saying the murder of Msando is under the watch of the incumbent president. However, there are questions about the lifestyle of Msando, which has cast doubts about whether his murder is election related. He was not the only one murdered. A woman was murdered along with him or woman likely murdered at the same time was found in the same vicinity, where his body was discovered, according to news reports.
The relationship between the murdered electoral officer and the murdered woman, whose body was found near the body of the electoral officer, has not been established by investigators, and it is not yet clear whether the woman whose body was found near the electoral officer was the one seen in his car in the dead of the night, prior to his murder.
When Msando's wife was questioned about why she did not report the missing of her husband until three days after Msando was not seen in the house, she said that the husband was used to staying away like that from the house, and that was why it took her three days before she reported him missing to the police.
One question that investigators may need to ask Msando's wife is that if Msando has been used to staying away for three days from home, what may have prompted the wife to report him missing this time around before the discovery of his body? Why was there no waiting until the man may appear at home, and has the wife anytime before reported her husband missing before this incident?
Many people think that it is a dangerous trend for a man to leave work at about 0900 pm and goes to a club in the company of a woman (not his wife). Was it on official business or romantic affair? This question and others are part of the questions that investigators will find answers and piece together to get to the root of Msando's murder.
But the possibility of getting to the root of the murder before the election is very slim. Already, relations and friends of Msando have staged a demonstration, showing concern about the murder of their loved one, and calling on the government to get to the root of the murder. They said Msando will not be buried until after the election, based on information from Kenya.
Msando was reported to have been killed by strangulation, based on postmortem witnessed by his family. Nothing has been said whether a postmortem had been carried out on the body of the woman found by his side and whether she was also killed by strangulation. Investigators are reported to be looking for four people of interest.
Comment Box is loading comments...
NEWS AND FEATURES
News & Features Around The World