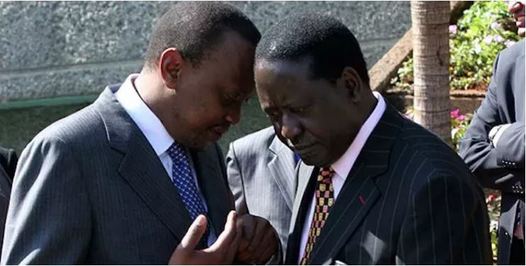 Uhuru Kenyatta and Raila Odinga
Recent events in Kenya remind observers of Fela Anikulapo Kuti’s musical compositions about sorrow, tears and blood, as the trade mark in many African countries, where the police and the army are instruments of suppression.
“Everybody run, run. Everybody scatter, scatter. Some people lost some bread. Some nearly die. Some just die. Police dey come, army dey come. Confusion everywhere. Seven minutes later. All don cool down, brother. Police don go away. Army don disappear. They leave sorrow, tears and blood.”
It happened recently following Raila Odinga’s swearing in as the people’s president in Kenya. The police went and arrested the lawyer who swore Odinga as people’s president. They shot guns, broke down doors and windows. Many people thought Kenya was in a civil war situation.
Although, they did not kill Miguna Miguna as the opposition member is named. The police in Kenya, like other the police and army in many African countries, nevertheless left behind their regular trademarks – sorrow, tears and blood. And the news that the man they arrested had been forcibly deported from Kenya to Canada, against his will was a sign of the evil that the opposition in Kenya is fighting.
It shows Kenya as a lawless country. Miguna Miguna was detained for days against court ruling for his release. And when the cloud cleared, the world heard that Miguna Miguba had been deported. Did the court ordered Miguna Migina deported? Of course, Kenyatta is president, the court and everything. He teaches the media houses how to do their reports and closes media houses that refuse to abide by his rule.
Obviously, the opposition in the East African nation seems not done yet in showing observers that they are ready to fight for their rights, against statements that say Africans either don’t fight or are not ready to fight for freedom, because they are afraid to die.
Odinga and his opposition colleagues have proved that it is not the “River’ between Kenyans that is the problem in the country, but the mentality of leaders from a part of the country, who want to keep the country’s leadership exclusively to their own part of the country.
It is obvious that Odinga is not the person or leader threatening Kenya’s unity, but those leaders who are working against inclusive leadership, and are manipulating elections to achieve their selfish objective. Is there anything wrong for a party to win an election and to call on the losing party to form an alliance, an alliance that will give the other part of the country a sense of belonging?
But no! Uhuru Kenyatta would better have winner takes all. Odinga gave conditions for a coalition government not to satisfy any selfish end, but to make leadership inclusive and save the country from a journey to nowhere, which current situation of one part of the country continues to win election in a winner take all program.
Part of the conditions given by Odinga for any discussion between the opposition and Jubilee was that there must be agreed rules for transparent election in the country. Meaning that the part of the country that may have been winning election in the winner take all program must have been under elections that lack transparency.
A good example of such elections was the election that was cancelled before the last election won by the incumbent with 39 percent voter turnout and in which a part of the country controlled by the opposition refused to participate. The same lack of transparency and struggle for power led to the killing of over 1000 people in 2003, a development that led to Kenyatta and his deputy’s trial in The Hague.
But Kenyatta led Jubilee Party does not seem to have learned any lesson from the 2003 impasse, killings and the dragging of the country’s leader to The Hague. The leadership is showing that it thinks the misuse of the police as instrument of coercion is the answer to the country’s problem.
Uhuru Kenyatta’s leadership certainly needs a lecture about inclusiveness in government from Odinga, if Odinga’s declaration and swearing in as people’s president is not enough to teach the lesson.
HTML Comment Box is loading comments...
NEWS AND FEATURES
News & Features Around The World