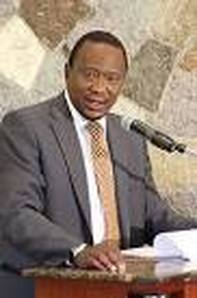 Uhuru Kenyatta
Uhuru Kenyatta, deputy prime minister and son of Kenya's first president has emerged winner of Kenya's presidential election, defeating the prime minister, Raila Odinga. But the East African country hasn't completed navigating the dangerous bend of uncertainty, with the prime minister's vow to challenge the election result.
What further makes the political situation in complex and intriguing is the fact that the election winner and his running mate, William Ruto, have a case before the International Criminal  Court for crimes against humanity. This raises a vital question about the decision of the Independent Electoral and Boundary Commission,IEBC, whether the case before the ICC had not started when it registered Kenyatta for the election.
This lack of oversight by IEBC makes the current political uncertainty in Kenya a reminder for readers of Ngugi Wa Thiong'o's writing in The River Between, the story of a promising teacher who became a political leader, but messed up his chances of victory to lead the country because of a minor mistake of inability to navigate a dangerous political bend, falling in love with a young woman he shouldn't have contemplated an affair if he had a sound political judgment.
Reports say that Kenyatta and Ruto's case arise over the 2007 political massacre of about or over 1000 souls in that year's disputed presidential election. Although, both have claimed innocence, observers aver it is bad enough that they have a case for crime against humanity in that court, while campaigning for the presidency. Kenyatta has said he is sure that the ICC will clear him of wrongdoing, that he is looking forward to clear his name.
Observers are saying that the picture of Kenyatta and Ruto both having a case in an international court for crime against humanity makes Kenya's politics, their victory at the poll and Odinga's vow to challenge the election result an interesting scenario to watch.
NEWS AND FEATURES
News & Features Around The World