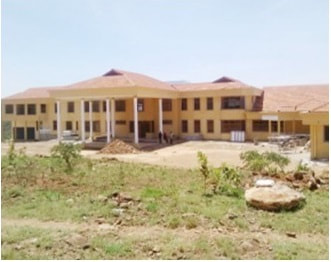 Odinga's home in Kisumu part of Kenya, where he plans his swearing ceremony to take place (Courtesy: KenyaPost.com)
Uhuru Kenyatta was sworn into office for the second term after he won an election described as a 'sham' by the opposition. Now, there is unbelievable information from Kenya about a planned swearing in of Raila Odinga in Kisumu, on December 12.
All Kenya newspapers are reporting plans about a swearing in and warnings from several quarters, including the Kenya's government, for Odinga to stop what will amount to treasonable felony, an act  punishable with death.
All Kenyans, including a representative of the American government, who believe they mean well, have been persuading Odinga, from committing felony. But Odinga seems to be adamant, based on reports from Kenya.
From all indications, Odinga may have made up his mind to commit treason any way and the world is waiting to see how he goes about achieving his plans under the watchful eyes of  gun totting Kenyan police men, who are known to shoot to kill and have killed so many unarmed Kenyan opposition members, leading to question about whether because the international community has cautioned Kenyans against repetition of the 2003 killings and for Kenyans not to resort to killing themselves again, police have been empowered to kill unarmed people without any sense of remorse?
Now questions are rife about Kenya heading toward a political Armageddon with two presidents against the letters of the country's Constitution or whether Odinga is working towards secession? Primarily, Odinga has declared himself as the country's resistance leader. People's Assemblies have been formed, while Kenyans await what will follow on December 12.
The United States has urged Kenyans to follow the Constitution and advises the opposition to disembark from acts capable of leading to disorderliness. But Odinga has also hit back at the U.S, asking whether the U.S. has not seen how defenseless people have been killed and the people's will taken away.
Reports say that after defying the U.S. stance on the situation in Kenya, Odinga has met with the diplomatic community and that the U.S. insisted that Kenyans must obey the Constitution.
Kenyatta has said nothing about the news in circulation concerning plans for Odinga swearing in, but the country's justice minister has spelled out the Constitution in respect of treason and the punishment for swearing of a person, who has not won an election as requested by the Constitution.
Reports show that if Odinga will be sworn in at all, the ceremony will be in Kisumu, a suburb in Kenya and about 164 miles from Nairobi. Kisumu is likely part of his stronghold, where he also has his home, which the Kenya Daily Post says dwarfs the state house.
Possibly, Odinga may be getting ready to be sworn in as Kenya's resistance- commander -in-chief. The only venture outside getting into trouble with Kenyatta and his deputy, William Ruto.
​
HTML Comment Box is loading comments...
NEWS AND FEATURES
News & Features Around The World