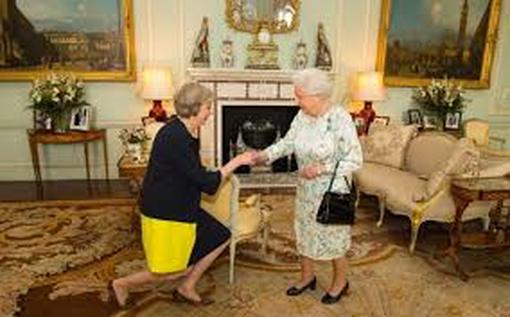 Prime Minister Theresa May, kneels before Queen Elizabeth (Courtesy:DNAIndia)
When did you first heard about the terror attack at Manchester, near London? Was it on Monday night or Tuesday morning? And what was your immediate reaction to the terror attack in Britain?
It was not in France or Belgium or Germany, three European countries, which have been at the receiving end of much of the terror attacks lately, but Britain!
It is exactly what residents around the latest terror attack in Manchester, where Salman Abedi - the attacker lived, have said about their immediate reaction to the attack.
They said they wonder and watch what they have watched in France, Belgium and Germany, happening near their own homes. in other words, they are saying it is possible for this thing to happen anywhere. It can happen in any neighborhood and anyone can become a victim.
Terrorists are like thieves in the night, who steal into people's homes without formal announcement. They come, when they are not expected, and they leave behind them, stories about death, destruction, crying and anguish. Their major objective is to exact enough pain on the people. It is the duty of governments to protect the citizens against the marauders, because humans are not goats to be killed wantonly without serious repercussions.
Even, if it is only one person who dies as a victim of terror, members of the family will know they have suffered an irreparable loss. The government, which responsibility it is to ensure protection of lives and properties, would have no reason to give for not ensuring the protection of life that may have been lost.
Emerging information from Manchester said that the that the attacker may have  been under police radar prior to the attack, meaning that Abedi had been under police watch. No one has said anything about why he has been left to carry out the attack and not taken into custody.
Prime Minister Theresa May was quick at making a statement on Monday night, and followed by that of Queen Elizabeth on Tuesday. If you have read the statement from both women charged with responsibility for security of their people, you would understand their tones of helplessness.
What can the police do in the circumstance of people living among us and have decided to become instruments in the hands of outsiders against us? The police work in circumstances that make the odds to be against them. Unlike soldiers, who can identify the enemies or the society's enemies in different uniforms at battle fronts, the police don't have the means to identify the bad guys in the society.
Without the seeming state of helplessness that terror has placed the society that leaders are helpless and the police cannot do beyond their human capability to identify bad guys, it would have been required that leaders and the police or law enforcement under them be held responsible for failing to do their job, anytime there is a terror attack with lives lost.
May be that would make leaders to take the aspect of protection of live much more seriously than they are currently doing to protect innocent people under them against terror attacks. Promises of protection and fight against terrorism are made during electioneering campaigns, and holding the leaders responsible seems to end there too.
But the irony is that the terrorists live among us and it makes it pretty hard to make the leaders culpable for loss of precious lives from terror attacks. Yet, despite the encumbrance, more should still be expected of leaders for the protection of lives beyond the issuing of condolences, because condolences don't bring back lost lives. Killings by terrorists must be stopped! This bloodletting must stop.
Comment Form is loading comments...
NEWS AND FEATURES
News & Features Around The World