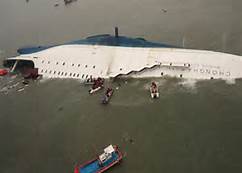 Four people have been confirmed dead and about 300 others missing from a South Korean ferry that sinks in the South West coast on Wednesday. It is feared that many people may have been trapped below the deck.
About 320 of the passengers are said to be students. Some of the passengers were seen jumping off the sinking ferry in desperation for safety.
NEWS AND FEATURES
News & Features Around The World