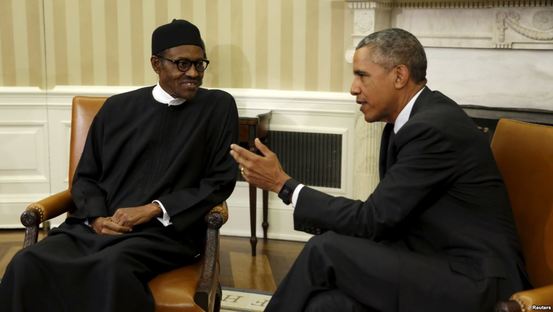 Presidents Muhammed Buhari and Barack Obama
Every time, from country to country, new leaders emerge, after elections or through the butts of the gun. These new leaders, in the case of the military guys, who seize power to foist a revolution, the revolution they have flown its kite as being the reason for their emergence, becomes non-existence.
It has also become very manifest that most of the new emerging democratic leaders around the world win elections, but few show little dimension that they understand the enormity of their countries problems or they have prepared themselves for tackling their countries' problems, and that they don't  get the definition of leadership.
In the ensuing catastrophic struggle between the president's office and the congress that represents the people, the people's welfare is sacrificed by the president's office for pushing his own agendas to win applause and help keep his own party in power, so that members of the president's party will continue to have access to the trappings of office. Helping to ensure continuity of own party in power for the booty to go round party members has replaced the salient interest of the general populace's
In most cases too, members of the Congress have forgotten their mandate to protect the interest of the people and advance their welfare. In its place, you now have everyone seeking to take care of its own. Presidents are no longer humble or they failing to realize that humility is an important ingredient of leadership. Yes, the office of the president is the most powerful in any country, yet in philosophy, presidents are expected to serve to lead and not lead to serve.
Outwardly, a leader may pose to be humble, but for him or her to be different in his or her approach to official issues, wishing to have his o her ways all the time against the people's representatives. When a president poses to be commanding to the representatives of the people who expect a sense humility, they too will become gutty and difficult to manage for the president. And yet the president is supposed to manage the representatives, for both to work toward achieving the objective for their election as president and representatives.
It is often said that two wrongs can never make a right. When the president says that the Congress is the problem and the Congress says that the president is the problem, something is wrong somewhere that needs to be straightened. Leaders in whatever position are not supposed to be arrogant toward another. Arrogance is not an ingredient of leadership. Collaboration is a new phenomenon in human management, which democracy has foisted ahead of the new technology.
Leaders ought to seize the opportunity that the new technology offers in term of collaboration, match it with philosophical ingredients of leadership as taught by Christ. For the lack of these values, it is often to hear murmurings about the relationship between the office of the president and the Congress in the United States as affecting the delivery of the promises these leaders have made to the electorate. America is a typical example of a country, where the issue of leadership is posing a serious concern that has pitched the electorate against the two parties, the president's office and the Congress.
The Congress, led by the Republican party, is the most dismal in the matter. When you leave the U.S and go to Nigeria, the trouble over selection of a senate president by the ruling party and the phony trial of the successful candidate in the election of the senate president for offenses he allegedly committed as governor of his state years ago does not represent democracy or an act of acceptable leadership. It is an act of witch hunting.It is worse than arrogance and it is capable of Karma.
President Muhammed Buhari and the party that he leads ought know better, because it is said that wisdom resides with the aged. If a country is seeking to fight corruption, let it fight corruption without turning the fight against corruption into witch hunt. There is no where in the training about leadership, in which it is said you have to destroy others to succeed.
A divided house cannot stand. The ruling party in  Nigeria is divided over the sharing of political offices in the Congress and the party or the government is telling the Nigerian public that its move to punish one of its own for outsmarting them in the office sharing imbroglio is part of the fight against corruption. It is not, and that act of witch hunt, is not part of leadership. It is not the type of leadership Nigerians have voted for. It is part of the senseless political struggle they have known in the past and of which they want no more of it, because it breeds no progress but retards it.