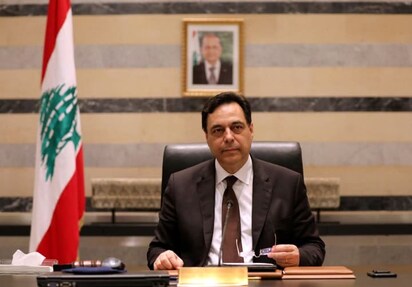 Now former Lebanese prime minister Hassan Diab
Hassan Diab,  Lebanese prime minister for seven and a half months resigned on Monday. He came into office in January 2020 amid crisis, and he left amid crisis. Lebanon's crisis has deepened beyond mismanagement and corruption to complete loss of trust in the country's entire political leadership.
Resignation of Diab and his cabinet did not surprise political observers and nor is protesters's request for the sack of the entire political leadership. However, the possibility of sacking the entire political leadership is what  is beyond curious observers.
The Lebanese Constitutional set is such that the president picks the prime minister with the support of the majority of members of parliament. Whenever there is a crisis, the prime minister is often sacrificed. And the reason the country has witnessed resignations of two prime ministers in succession less than one year.
Now, the protesters are asking all the leadership, including the president whose job is to pick the prime minister, to go. The question arises about who would fill the vacuum in the presence of the president after the resignation of the prime minister? Ironically, protesters are asking both the president and members of the parliament to go.
The one door that is open to the president is to appoint a caretaker government, dissolve the parliament and call a new election. The Lebanon political situation is that bad that the people no longer has faith in the leadership.  There has been discussions about corruption and mismanagement as well as protests against hunger.
Last week Tuesday's explosion in Beirut and the death of over 200 people has exacerbated an already complex and seemingly unmanageable political situation. One prime minister resigned in October 2019. A new one was sworn into office in January 2020, and he left few hours ago. How does the president think he will survive the situation?
The picture of the battle between protesters and police near the parliament building says much about a country in crisis and turmoil. And the departing prime minster said as much with his admission that the explosion that rocked Beirut last Tuesday was caused by endemic corruption that has pervaded the Lebanese politics for years.
Now, Diab said he would been joining protesters to seek a change that Lebanon needs and blames the long years of unchecked political corruption for Lebanese woes.
​
Comment Form is loading comments...
NEWS AND FEATURES
News & Features Around The World