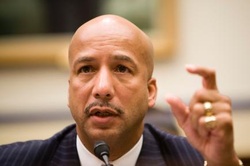 Former Mayor Ray Nagin
Former mayor of Louisiana, Ray Nagin, has traveled from former mayor to the court room, and his lawyers arguing for  lesser years from twenty years from a life of corruption. There is a lesson for public office holders to learn from Nagin's journey to the court room and jail bound for 10 years, for which he has been sentenced for bribery, money laundering and corruption.
Court documents reveal through a BBC report that from June 2004, Nagin accepted payments, gratuities and travel in exchange for city contractors and other porks. He accepted more than $160,000 in bribes from Frank Fradella, a local businessman. Prosecutors further said that Nagin traveled to Hawaii and Jamaica on the tickets provided by businessmen. He also accepted free trip on private jet to Chicago, Las Vegas and new York City. He received free granite for his family's business from a contractor as a bribe.
Nagin became famous following the Hurricane Katrina's devastation of Louisiana in 2005, when he publicly nagged authorities to come to the city's aid. He had been convicted in February; Judge Helen Berrigan sentenced him today to 10 years in prison, after listening to Nagin's lawyers that prosecutors' request for 20 years would amount to life jail.
NEWS AND FEATURES
News & Features Around The World