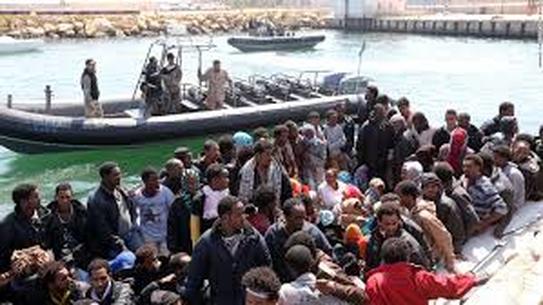 People ion a boat hoping to get into Europe
What have you derived from the news from Libya? Do you see any trace of a breakdown in law and order in the country?
Do you think selling people into slavery with money exchanging hands and humans as commodities can take place in a land with law and order still in place?
The first statement of concern about Libya concerning the sales of humans as slaves is what has become law and order in the country.
And the next statement is that Libya has not recoverd the slip into anarchy from the war situation following the strife against Muamar Gaddafi and his resultant elimination.
The war may have ended in Libya after the death of Gaddafi, but the on the other hand it has not really ended, becuase there are still characteristics or elements that show that the war in Libya has not ended. One of such elements is the sales of humans as slaves in the 21st Century. Reading the Punch about Nigerians who reveal how they are sold, and shows that Libya has become a country under the rule of bands and bandits.
The sales of humans has not been the first element of the endless war in Libya. We all rmemeber how the American embassy was burned down and the ambassador killed with some other Americans in the embassy. There have been news reports about different kinds of ISIS faces in Libya struggling for dominion.
From reports on the sales of humans in Libya as commodities to highest bidders, readers see how some nationals from other countries, particularly Nigerians, sell their compatriots and show to be harder on their campatriots to the extent of saying that there is no brother in the jungle.
Apart from that statement confirming that Libya has since turned into a jungle and that the country has not seized to be a jungle despite having a central government, it also shows that there is a government in Libya like there is not a government there. Libya has thus turned into a land where everybody is a power unto themselves.
Although, a representative of the government in Libya said that selling people as slaves is not part of the culture of the Libyan people. Has anyone said that selling people is part of the culture of the Libyan people? Isn't selling people in that country a situation forced on the country amid turmoil and inabilitity to maintian law and order after the war? Was not the breakdown of law and order manifest before the American embassy was burned and personnel killed in Benghazi? Wasn't the manifestation of the breakdown of law and order that made the British government restricted its activities to Tripoli by morphing up all it had in Benghazi to ensure the safety of its embassy and personnel?
Now, that breakdown of law and order that manifested early in Benghazi had moved into Tripoli. Someone had curiously asked a question that when people end up being sold as slaves, where are they taken or where do they end as slaves? Do they remain in Libya or put into a boat to somewere else to be slaves to new owners outside Libya?
One Nigerian had revealed that after he was sold and his buyer got him to the seaside hoping to get into a boat to travel across the sea, he was shocked when the person who had first bought him and brought him to the seaside decidedly sold him to another buyer.
The representative of the Libyan government talked about the origin of the illegal migrants who use Libya as transit and the final destination of the illegal migrants. Can this be trans-mediterrenean slavery? The Libyan government representative seems to be saying that the evil in Libya is connected to illegal migration and the suffering of the African man looking for better life in Europe.
He demands for an end to exploitation of the African man. Exploitation at home by his own government, exploitation in transit in Libya and exploitation in the country of final destination.