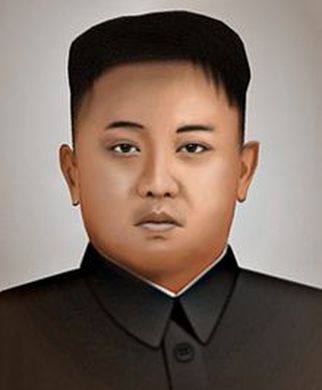 Kim Jong-un of North Korea
Kim Jong-un of North Korea has said that his country is ready for battle against America. And not only that, he also said that his country will defeat America. One of Jong-un's aides said to be one of the country's most senior serving officers, whom Jong-un has not shown the way to the grave, also reiterated Jong-un's words.
This could be history repeating itself and a prove that politicians hardly learn from history in and outside their own country. Jong-un was 19 years old in 2003, when Saddam Hussein said that Iraq was ready for battle and would defeat the U.S. in a desert battle.
Jong-un became North Korea's leader in 2011, eight years after Iraq's fall and Saddam was picked up from the Spider's hole, running away from battle. Jong-un should have been old enough to learn about the exchange of words between the U.S. and Saddam before the beginning of the war in Iraq.
If Jong-un has not learned from history, he could be forgiven. But he ought to know about a proverb, which says that it is only an empty drum that makes noise and that a drum that is full don't. Shouldn't it have been better for Jong-un and his officers to keep their mouths shut and allow the battle to begin for them to prove themselves, rather than boasting to possess some powers that have never been proved?
It is true that the world watches the impressive the impressive matching of North Korean soldiers in fine columns and display of military arsenals on the television. But can that be used to determine the military prowess of the soldiers, who have no interaction in combat outside North Korea for a long time?
The case of North Korea and its leaders is showing the world how leaders prop up ordinary people to use as soldiers to use guinea pigs in defense of themselves and their worn out philosophy. At the ned of the day, they will not only endanger the country and the innocent people who have enlisted as soldiers, but put the country in a perpetual state of disrepair after encountering a more powerful force in military combat.
In 2003, before the beginning of the war in Iraq and the destruction of the country and the people, people said that if Saddam loved the country, he should not dare to engage more powerful countries in military combat. But Saddam was clueless and he went headlong into what became his own destruction and the destruction of the country. Iraq is still fighting a perpetual war and no one knows when it will end.
However, many said that it was possible that the blood of innocent people, who belonged to different tribes in Iraq and whom Saddam was accused of having turned the nozzles of the gun may have cried for justice.Is the same not happening in North Korea today? Jong-un may not have people from different tribe to eliminate, but those he suspects of possibility of competing with him over the throne are known to disappear like the air we breath. Imagine his elder brother, who lived in exile in fears of elimination, but who still got eliminated in Malaysia.
It is possible that aside from the testing of ballistic missiles times upon times and threatening to attack countries that are more powerful than his country, the blood of the people he has been shedding silently may be crying for justice! And that is the only justifiable reason for his boast of capability to defeat a more powerful country in a war, than seek a way to maneuver a dangerous situation. Fulfilling a proverb that it is those that God wants to destroy he first makes mad.