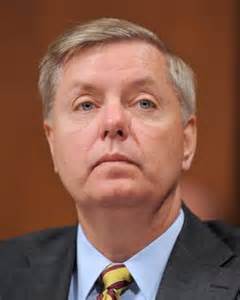 Lindsay Graham
Senator Lindsay Graham appeared in an MSNBC program on Thursday for an interview. Graham spoke about  the crisis in the Republican Party, Ted Cruz's statement on the need to police Muslim neighborhoods as a way to stop terrorists plans against America, and why he (Graham) is supporting Cruz against Trump, despite all the negative statements he had made about Cruz in the past.
The television station's interviewers recalled Graham's past statements about Cruz to show Graham's inconsistency. But Graham said that all he had said were all the truth he had, and that if he had more, he would have said them.
Though, the interviewing duo expressed shock on their faces to show their disgust of Graham's inconsistency, but they failed to tell Graham he was highly and unreasonably inconsistent. But through the questions they asked and the answers that Graham gave, any viewer could have seen that Graham's problem was Donald Trump, winning election at all cost and no tenable reason.
Why would Trump make anyone throw out his or her sense of reason? How do you know that Graham has thrown away his sense of reason? Hear his answer to an interviewer's question on why he thinks Cruz should have advanced a statement for the surveillance of Muslim neighborhoods.  He said something like Cruz was a little bit becoming like Trump.
The problem with Graham and what has made the loss of reason so glaring in his statements is that Cruz whom Graham and other anti-Trump Republicans have chosen to support in the presidential race after Marco Rubio's fall in the race has said something similar to what Trump had said to do against terrorism, though not actually the same as the one said by Trump, for the protection of the country against terrorism, and the public's criticism of Cruz's position shows that Cruz is in no way better than Trump,
Manifestly, Cruz has begun to act like Marco Rubio, who everyone knew began to act like Trump by abandoning his known attributes, because he wanted to impress the anti-Trump bigwigs and financiers in the Republican Party, believing that by being like Trump to show that he was against Trump, was a viable way to gain votes. At that time. I compared Rubio to Malvolio in Shakespeare's "As You Like It". Now Cruz has taken up the same Malvolio's garb and has begun to act toward failing like Malvolio and Rubio.
Of course, Graham does not care what happens about his won decisions, whether reasonable or unreasonable. He believes he can support anyone as long as the person is the only choice he has to stop Trump, careless of public's perception and ability to reason. To stop Trump has become his major objective and not to do something to advance the American cause. considering Graham's position earlier on Cruz and his decision to change and support Cruz, and the reasons he is so much against Trump, one wonders whether Graham has any discretion left.
If the lack of reason and consequently discretion, as demonstrated by Graham on the M.S.N.B.C is anything to consider, one will not be mistaken to say that the Republican Party and the American Congress surely have a need to replace Graham. But I believe that no one can try to stop Graham other than the voters in South Carolina.