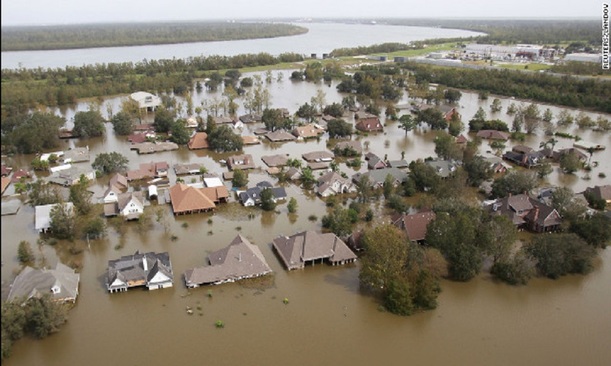 Part of Baton Rogue under the water again
The Red Cross has reported that thousands of residents in flood ravaged locations in Louisiana have lost everything.
​   This is a story of human suffering that reminds us of Katrina and Louisiana residents' experience in 2005. It is the same story of torrential rainfall, flooding, the breaking of levee or water overflowing of the levee.
Nine people dead. 40,000 homes affected. Levees overtopped by flood. 10,000 people in shelters. 20, 000 people rescue.  According to news reports,  this follows a record of one week rainfall of 6,900,000,000,000 gallons. The CNN's  report said that more than 31 inches of rainfall poured down in 15 hours.
With Hurricane Katrina and its accompanied devastation, the resultant human loss and suffering captured the world's attention. And now, it is also capturing the world's attention. It placed George Bush, then the president of the United States, under harsh criticism, for lack of quick response to Katrina's devastation of Louisiana. And now, it has placed President Barack Obama almost in the same shoes with Bush, for not cutting short his vacation to attend to Louisiana, and for playing golf instead of rushing to Louisiana.
No one had expected that the story of Louisiana's flooding and human suffering will be repeating  itself, given the country's Hurricane Katrina's devastation and its fallout then.  This is believing that all that are needed would have been done to avoid a repetition. But it is not so. This time, no levee has been reported broken, but the flooding water has reportedly topped the levee.
No thanks to torrential rain. Was not it known that excessive rain that accompanied Katrina and the overflow of levee and bad drainages were the cause of the last flooding experience in Louisiana?  What have the authorities in Washington and Louisiana done to address these shortcomings, before the present disaster? Katrina hit Louisiana in 2005, roughly 11 years ago. Is 11 years not enough for the authorities to do whatever it is needed to be done to help save residents in Louisiana from perennial flooding from torrential rainfall?
Does it mean that after the Katrina's devastation, the massive loss and human sufferings, authorities believe that all is well without construction of massive drainage system aside from building of levees, to properly ensure that residents lives and properties are safe? And now, not only lives of residents and properties are unsafe, even those who have died and in their graves are not spared of the agony arising from this seeming neglect in Louisiana.
The television cameras have shown a casket that has been uprooted from the ground by the flood. What worse experience can anyone, alive or dead, than being put out of one's home by accidents that is preventable?
​