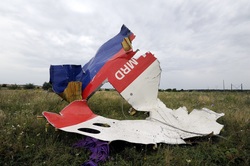 Part of remnants from Malaysia's Flight 17
﻿   What was your immediate reaction, when you heard of Malaysia Airline's crash in Ukraine? To most people it was consternation and questions to confirm if it was true that another Malaysia Airline's flight had been involved in a crash. The question was caused by knowledge of Malaysia Airline Flight 371 that went missing with 239 passengers without a trace. When additional information said there were 298 passengers in the crash in Ukraine, and that the plane may have been shot down by enemy combatants in Ukraine's war, the question still remained about why should it be another Malaysia Airline's flight again?
It is certain that even officials of Malaysia Airline may have asked the same question about why Malaysia Airline again? It is a normal human reaction, when being a victim is becoming constant. After these questions about the Malaysia Airline and fate, and the fate of their passengers, one begin to rationalize on whether it was acceptable or not for a commercial flight to fly on a route over a war zone, where according to Matthew Arnold ignorant armies clash day and night fighting over what most of them don't even know. It is the type of thought that will naturally assail you as you read in the news that most of the bodies of the crash victim have been moved from the war zone to Kharkiv, another town in. East Ukraine that is not a war zone.
Accusing fingers have been pointed at Vladimir Putin and his country, Russia, in the heat of passing responsibility for the Malaysia Airline's crash, leaving the issue that matters - the cause of the war in Ukraine - unaddressed. The reason people are blaming Putin is that he has given support to the separatists in Ukraine and he is supplying them with arms and men to fight their war. The question that has not been asked is whether Russia is directly involved in the Ukraine's war? Isn't it the same that is happening in Syria that is happening in Ukraine? In Syria, armed men have gone after Bashir Al-Assad, seeking to sack him or seeking to take the country from him. Putin's Russia supplies arms to Assad, just like some other powers supply arms to Assad's enemies. Does this mean Russia is directly involved in Syria's war or the other powers are directly involved in the war in Syria?
The other powers supporting Assad's enemies and Putin's Russia supporting Assad are not hidden from the world. The same is happening in Ukraine, where Putin is supporting the separatists and other powers are supporting Ukraine. The question at this time is whether Ukraine's separatists have the right to seek self-determination or not? What is wrong if the separatists choose to have their own country or go to hell that Russia is considered to be as already depicted by some analysts? This is the question that needs to be answered to end the war in Ukraine and to stop the bleeding and killing of innocent souls as the world has witnessed in the downing of a commercial flight with innocent passengers.
Apart from the innocent passengers killed in the crash, what about Ukrainians who don't know anything about the policies that have caused this war and who have been put in jeopardy's way? It is one of the reason war is not and will never be a delightful undertaking.
The difference between the case in Syria and Ukraine is that Assad has been seen killing his own people in defense of himself and that has given his enemies the world's sympathy. Unlike Ukraine, where corruption had taken life away from the country and the struggle for power among corrupt politicians caused an abdication and foreign interventions, with a show of might between Putin's Russia and other countries that are behind the powers in Kiev.
The solution to the war in Ukraine is for the powers behind Kiev to tell Petro Poroshenko the bitter truth about surrendering to losing part of his country, where separatists say they don't want to be In Ukraine. The situation in East Ukraine did not escalate until Kiev began to push to take back with force areas that had torn away from Ukraine, and with a vow from the country's new Army commander to add Crimea to his country's gain in the war.
Comment Form is loading comments...
NEWS AND FEATURES
News & Features Around The World