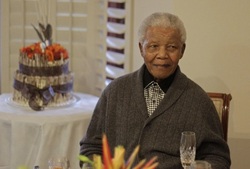 Nelson Mandela
Nelson Mandela as a winner is no longer in doubt. He fought apartheid
and won; and he fought against human desires and won. Now that he
has left the hospital and he has returned home after a long time receiving
medical care, he has won against ill health and death anticipation. The turn
deserves a celebration!
“Winner o, o, o winner; winner o, o, o winner, Mandela you don win o,
winner, completely you have won ….and forever you will be a winner,
winner.”
This is a line from a popular Christian chorus against life’s vicissitude,
and one that can be imagined being song by Mandela’s relations and
supporters this moment. It is not a mean feat to have been on a sick bed for
such a long time, either looking at death or death starring one on the face and people hoping it is about the last time to bid
bye and lucky to be here still.
It was partly the reason Mandela’s family was angry that the media besieged the hospital, where the former South
African president received treatment, expecting the news of that moment that never was. In their view, the media wanted a
piece of news about the icons passage and that was against the Zulu’s tradition.
The family soon discovered that to get the media that had besieged the hospital off was another war in addition to the
war of helping the icon in the fight against illness. But the press had no apology. They were merely doing their work, which
if they had failed, the world would have asked questions about lack of coverage for a man of Mandela's stature.
It is one lesson the media may have learnt that there is always a need to investigate what is acceptable and not
acceptable culturally anytime there is a need to do across the border coverage about life and death. Even if the
unexpected has happened, no one would have described it untimely, because our Mandela is old, has conquered death,
his life now and in future is about celebration of the triumph of good against evil.
Mandela is a winner. He represents humanity and everything that are good in it. He was not a sit tight leader. He was
not the type of leaders who would eat and eat and would never want to allow others to eat. He conquered fear, the fear of
apartheid lords rousing their heads again if he should step away from power. Mandela surely must be aware that power
does not reside with humans, but with God.
If Mandela has been paranoid like his counterpart in Zimbabwe that those he has displaced from power might rise up
again if he steps out, politics in South Africa would have been like what the world is witnessing in Zimbabwe, where Robert
Mugabe cannot trust to hand over power to people of his own color.
Mandela may have thought that he was not the one who sustained himself during the long years of struggle against
apartheid and life in jail; and that the same power that may have sustained him against evil powers of apartheid would
continue to work in South Africa. While he was in jail, some fellows continued the struggle. And it was not the
ferociousness of the struggle alone that forced apartheid to the wall, but the touch of an unseen power in the heart of F.W.
de Clerk - the man in power who thought it was enough of apartheid. Apparently, de Clerk may have realized it was
nonsense living in a society of an endless struggle, when he sets out unbanning everything banned, and set the country
on a path of freedom.
By now, members of Mandela’s family would have realized that Mandela belongs to them first; next belongs to the good
aspect of humanity and it is the reason he is under watchful eyes of the press. He is not under the watchful eyes of the
media because he is a celebrity, but in the words of Phillip Patterson and Lee Wilkins quoting Aristotle, a statesman and
embodiment of wisdom, one who has elevated the craft of politics to art.
People love Mandela for his conquest of human desire, which they believe must have enabled him endured through years
of travail in Robins Island unbroken - in the worldly sense of the world - but broken in the Christian sense of the word, for the
good of humanity. It was the reason for his ability to discount the State House and chose to live in the comfort his own home.
And with the news reports that he has left the hospital to the comfort of his home, the world is celebrating Mandela’s
conquest against ill health and his victory to be here still with us.