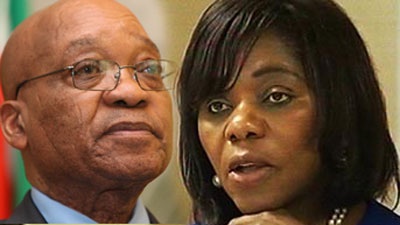 Jacob Zuma and Thuli Mandosela (Courtesy:www.sabc.com)
The African National Congress, ANC, wishes demand for President Jacob Zuma to refund part of R246m used for renovation of his Nkandla home goes away. But the office of the public protector is hitting hard at ensuring that Zuma refunds the money for renovation on his private, against ANC's position that renovation of the president's home is justifiable for security reasons.
The development has given opposition parties the strength to question political and moral relevance of the president and the ruling party.
The National Union of Metal Workers of SA said in a statement that there is no better measure of degree of rot, corruption  and complete loss of revolutionary morality in the ANC and SACP, than that poor South Africans lack adequate housing, and billion rounds in taxpayers' money goes on renovation of the president's private home.
President Zuma's latest headache about money used for the renovation of his Nkandla home arises over a letter from Public Protector Thuli Mandosela's office asking whether the president will choose to repay part of the R246m spent on swimming pool, cattle kraal, amphitheater and visitors' center, and the president responded to Mandosela's letter that Police Minister Nathi Nhleko would decide if he should have to repay any of the money.  According to News24, the ANC's had  asked questions over the coincidence of Mandosela's letter with a legitimate demand of the Economic Freedom Fighters' Party, EFF, asking if the president will repay part of the money. Mandosela said that the police minister has no power under the law to review her decision, based on the need for administrative scrutiny she has under the law.
But Mandosela is enjoying public accolade and support against ANC's stance over her query of the money spent on Zuma's private home in Nknadla, which she says is unrelated to security.
Archbishop Desmond Tutu has stepped into the fray in defense of the public protector's office.  Tutu appealed to the public for Mandosela to be allowed to do her work; called attention to the importance of the office of the public protector, the meaning of accountability and how Nelson Mandela responded to an invitation for him to appear in a Pretoria Court over alleged graft, his appearance in the court that demonstrated his accountability to the rule of law and administration of justice. Tutu further charged that if the ruling party has questions with public protector's office and process, the party should approach a court of law rather than engaging in name calling.
Mandosela has personally appealed to the ANC to end the name calling and allow the management of the tension between the party and her office as adults,  and in a way that respects the institutions than their times in office. She said the office of the president has been cooperating with her before the leakage of her letter in the media, an action she says she does not support. She is saying that as a public protector, she is independent from political parties and that her office is to support and strengthen constitutional democracy.
The ANC had called on Mandosela to name the politician who leaked her letter to the media, and  Mandosela had expressed belief that her letter was leaked  by a senior ANC  official. The ANC said it was the third time issues had been leaked to the media in respect of her office and the ruling party, and said that was against the independent role expected of her office.
NEWS AND FEATURES
News & Features Around The World