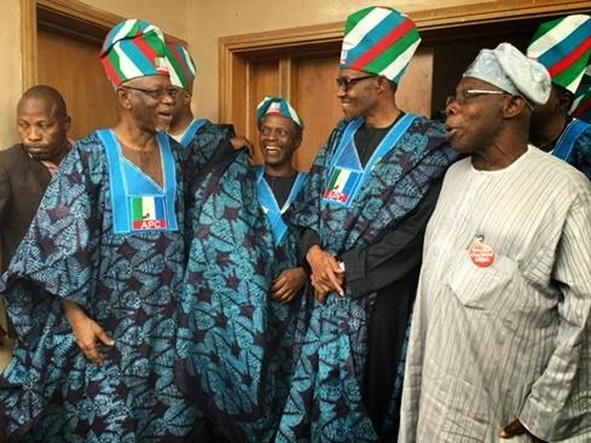 Men who wants to rule Nigeria
When last did you see the type of hat these men are donning in this picture? Look at their smile? Of course, no one expects them to be crying. But does their smile in the picture suggest men who are serious and ready for serious business?
The un-official presidential election referee, Olusegun Obasanjo, is apparently happy that his scheme against the incumbent president is succeeding. He tells the world the good and the bad among Nigerian politicians.
They probably are happy that with the lackluster performance of President Goodluck Jonathan, as they have been saying, believe Nigeria will slip into their control in February. But many Nigerians are already doubting whether or not these guys will be better than the incumbent president.
In one of his campaign outings, Jonathan said that his generation had failed the country. But Governor Fashola of Lagos State thinks otherwise. He responded by saying Jonathan's generation may have failed the country, but that he has not, because he does his work.
Observers say that what Fashola has not said is that he does not belong to the same generation with Jonathan. They say by association Fashola cannot claim not to have failed Nigeria. They wonder how a brilliant guy like him has been pushed to be subservient to Bolekaja leaders and a party's choice of a presidential candidate that APC has produced, when himself and another brilliant person would have been far better to slug it out with the incumbent president.
They say it is like Nigeria lacks people to aspire to position of leadership and that the country seems to be in Obasanjo's pocket.
NEWS AND FEATURES
News & Features Around The World